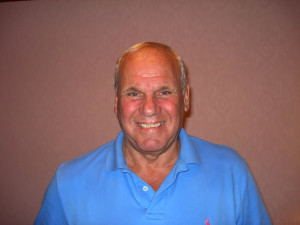 Bobby Woodruff pictured at the City of Cardiff Stadium in recent seasons.

Bobby Woodruff has thanked Wolves Heroes for reconnecting him with one of his Molineux team-mates from half a century ago – and made tracking down another a priority for 2015-16.

The 74-year-old was grateful to be given contact details by us for Terry Wharton, the winger whose stay in the West Midlands considerable outlasted his own.

But, having rung him in Perton last night, he is now striving to catch up with Ernie Hunt, with whom he overlapped for a few months in these parts after forming a firm friendship after their time together in the West Country.

“Ernie and I played alongside each other for Swindon at the start of our careers and became good pals,” Woodruff said. “So much so that he was my best man when I was married on FA Cup final day in 1964.

“I had signed for Wolves a few weeks earlier but we had our wedding down there and Mike Summerbee, who had been another playing colleague at the County Ground, was present as well.

“I had to make sure at least part of the day was in a pub, where the chaps could watch the West Ham v Preston match from Wembley.

“I have stayed in touch with Ernie over the years but have lost contact recently. I understand he lost his wife and hasn’t been too well.

“There’s a suggestion he might be in a home in the Gloucester area, so I would love to know where he is so I can get to see him, or at least speak to him.

“He was great fun to be around – and a very good player for Swindon, Wolves and other clubs.”

Woodruff had the dubious honour of being dropped by Andy Beattie to enable Hunt to make his Wolves debut at home to Bury at the end of September, 1965. That was despite the fact he had just scored in the previous game. Maybe the fact that that match was a 9-3 defeat at Southampton that brought about Beattie’s dismissal and his replacement by Ronnie Allen went some way to explaining why changes were made!

Both Hunt and Woodruff were born in the Swindon area, the latter starting off at Molineux as a wing-half and becoming an inside-forward with a more than useful scoring record.

He netted a hat-trick of headers at home to Sunderland in April, 1965, and his record of 21 goals in 72 games in a largely struggling side justified his £40,000 fee and accounts for the fact Crystal Palace were happy to pay Wolves £35,000 for him in the summer of 1966.

Bobby was delighted to hear that he figures several times in the Wolves All Over The World book being brought out by our sister company Thomas Publications this month.

The coffee table hard-back concentrates only on the many games the club have played overseas and our latest interviewee was part of a squad who jetted off during his stay to distinctly sunnier climes as well as making a short hop to West Germany the following summer.

“I had only been at Wolves for a few weeks when I heard we were going to the West Indies on tour,” he added. “I couldn’t believe my luck – I think the furthest I had been with Swindon was Holland. 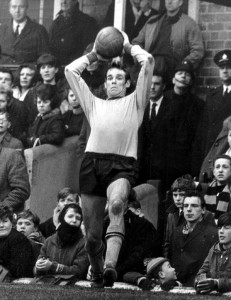 Woodruff, a recognised long throw expert, winds up to deliver at Molineux.

“I moved to Molineux in March, 1964, played ten games in a row up to the end of the season and got married on May 2. We just had time for a week’s honeymoon over with some friends in Germany, then we came back just in time for me to report to the airport with the Wolves squad.

“It was a wonderful trip and enabled me to get to know Stan Cullis a little. We rarely saw him relaxed but he was easier-going on that trip and I recall having my picture taken alongside him because someone said I had the best sun tan and he was the palest of us. I joked that it would look like a black and white photo even if it was in colour.”

Woodruff was a spectator at the recent Cardiff v Wolves game and hopes to be at the return meeting of the clubs in January.