To Sweden – With Love

Wolverhampton might think it had seen and heard the last of Maurice Daly, the talented young Irishman who turned his back on a new Molineux contract and walked into the arms of a Swedish girlfriend. Not so! Charlie Bamforth, our no 1 tracker-down of far-flung former players, has surpassed himself by locating him in the wilds of Scandinavia and now brings our readers the full fascinating story…… 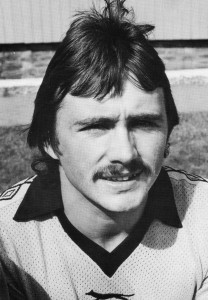 Maurice Daly at Molineux in the 1970s.

Wolves have a long-standing affinity for Sweden and have been there on tour many times. And it’s a love for a Swedish girl that took away one of the club’s best youngsters from the 1970s.

He has now lived in the land of Abba, Borg and Ikea for some 37 years after walking out of Molineux with no regrets. An Irish accent is in the ascendancy, although the message on the answer phone is decidedly Swedish.

Maurice Daly was born and raised in north west Dublin in November, 1955, and quickly showed his ability in the left-half position while at O’Connell School.

“The various districts in Dublin had their own sides and I was ten when I first played against Liam Brady,” he says. “He was brilliant even at that age.

“We played together for the Irish schoolboys side against Wales, who included Brian Flynn. Arsenal wanted me to go over there alongside Liam. But he had been travelling there since he was 11 to train with their youngsters during the holidays.

“His older brother Frank was over there and Liam had professional football in his blood. Let’s be honest: I was no Liam Brady. He was a definite, but, for me, it was just going to be a trial to see if I was good enough.

“I was a well-protected Irish Catholic 15-year-old. My parents wanted me to concentrate on my Junior Credentials and Senior Credentials (the equivalent of the old English O and A levels).”

Daly was, however, very much recognised as a player of ability and he started to play for the famous Dublin amateur club Home Farm.

“I have been told that when I played for the first team at 16, I was their youngest ever first-team player.”

Arsenal may have lost interest but Wolverhampton Wanderers were eager to sign the youngster, who was one of a rich bounty of young lads coming thorough at the time in the Emerald Isle.

Frank Stapleton, David O’Leary, Mick Martin and Gerry Daly (no relation) were others and Maurice skippered the Irish schoolboy, Youth and Under-21 sides – a testimony to his own abilities.

“Wolves’ scout in Northern Ireland, who I believe was called Fred Holbeach, had found Jimmy Kelly and Sammy Wright and was forever at our doorstep. The deal was eventually done with Joe Gardiner – no money changed hands. I signed on directly as a full-time professional on July 14, 1973, and lodged with Mr and Mrs Jack Screen near Castlecroft. (Jack was one of the trainers at Molineux).

“I was totally left-footed – the right one was just for standing on. In the second half of my first season, I found my way into the second team at left-half.

“No way was I going to get into the first team very quickly, with the likes of Alan Sunderland, Kenny Hibbitt, Steve Daley, Barry Powell and others around. But I was enjoying my time – especially playing behind my friend Jimmy Kelly. I won the ball and fed him – and he did the rest!

“There were a few injuries at the club and I was told they were going to move me to left-back. You didn’t get a choice in the matter – but I went on to love playing there.”

Wolves had innumerable talented young players at the time. Apart from those already mentioned, there were Gerry O’Hara, Norman Bell, Colin Brazier, Bob Hazell, George Berry, Chris Dangerfield and more. In Brian Owen and Brian Garvey, there were dedicated coaches determined to develop these players to be the very best they could be.

For the young Daly, the initial first-team opportunity came as a substitute. He went on for a few minutes in place of John Farley in a 1-0 victory over Ipswich on November 8, 1975. A few weeks later, again at Molineux, he had his first full chance, at left-back against Manchester City.

“We lost 4-0 but (and God forgive me for saying it) I loved every minute of it,” he added. “Mike Bailey was kind enough to say that I wasn’t to blame. I was marking Peter Barnes.”

I asked Maurice whether he did okay. He chuckled: “Well, obviously not, although I don’t think I made a complete fool of myself.”

Daly was given just two more opportunities in the first team that season. “Basically Bill McGarry threw me aside. However, I did do well for the reserves and genuinely look back with pride on the fact I captained the side throughout 1976-1977.

“Our coach Brian Garvey gave me a pen to commemorate playing in all of the games and I am still proud to have that. He was marvellous. He took me for extra training, specialised stuff. It was basically him that pushed me into Sammy Chung’s eyes. 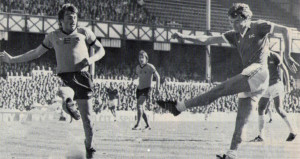 “I crept into the side in the pre-season of 1977-78 and played in every game on tour in Sweden. When we got back to England, we had friendlies against Crystal Palace in the midweek and Southampton on the Saturday.

“I had a nightmare at Selhurst Park. After the game, the team travelled to Southampton but Sammy Chung travelled with Bobby Gould in his car. Apparently, Sammy told Bobby he had doubts about me but Bobby told him he should start me in the first game of the season against Bristol City and that he should tell me straightaway I would be playing at left-back.

“Frank Munro was injured and Derek Parkin would be alongside John McAlle in the middle. After Sammy had called me in to tell me, I was delighted and Bobby Gould said: ‘You can thank me – now I want 10 per cent of your wages!’ As we say in Dublin, that’s a true fact!”

Apart from heading to a very substantial season with Wolves in the 1977-78 First Division, Maurice had also captured the attention of the Irish manager Johnny Giles.

“He had called all the Irish players based in England to a training camp at Bisham Abbey back in 1975,” he recalled. “There were about 30 of us.

“I must have done something right and played a number of times for the under-21 side. In April, 1978, I was pulled into the senior squad for a game at Lansdowne Road against Turkey which we won 4-2.

“Apart from Giles, Mark Lawrenson, Dave Langan and Gerry Daly were also in the team. Then we went over to Poland and played against the side who would finish third in that season’s World Cup. That was the best ever – it was brilliant to play against such players. I really enjoyed it, even though we lost 3-0.”

Little did Maurice Daly realise it but his days as a full-time professional footballer were almost over.

“I had met my girlfriend Annelie (now my wife) in Sweden and was planning to spend the summer of 1978 with her over there.

“Sammy Chung asked me to sign a contract before I departed but, after the last game of the season (ironically against Ipswich and in which I was not playing) I made my way down to Toulon, where I was skippering the Irish under-21 side as an over-age player.

“I fully intended to sign that contract – after all, I had had a pretty good season at Molineux and had played for my country. Everything was rosy in the garden as I made my way to Sweden.

“But, one day, I picked up the Daily Mirror, to find Wolves had signed Peter Daniel, a right-back. No way were they going to drop Geoff Palmer, so I reckoned Daniel would be moved to left-back.

“I rang Sammy and, in dressing room language, asked him what he was at. He asked me to go back and sign my contract but I told him I had had enough of being a squad player. I decided to stay in Sweden.

“Of course it was a big thing to walk away from a club like Wolves. But Sammy had not convinced me I was his man. There was hell to pay. The newspapers in Sweden made a heck of a ruckus – how I had given up a huge contract for a Swedish girl. But it was the right thing to do and I have never regretted it.

“I had always wanted to do more studying. It was something I tried to do while I was at Wolves but there was never enough time. When I did go to college, I first had to spend half a year learning Swedish.

“I spent two years at night school complementing my Senior Credentials from Ireland, before enrolling in a degree course in systems analysis at Örebro College (now University). After a year, I did not pass the exams I needed to, so I left to take a job in systems. 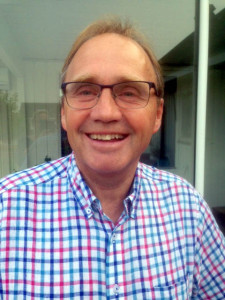 Maurice as he now is.

“I could do a bit of programming but someone in the company said I should really consider taking up psychology because I was good with people and they seemed to get on with me. I went on to get a BA in marketing and economics and I also have an MBA in organisational psychology. “

Daly is highly fulfilled as a consultant, helping companies develop their staffs and structures. He and Annelie have two daughters and two granddaughters. And he has no involvement with football, although he did play for several seasons with IFK Västerås and coached his local side Skultuna.

He has not been back to Wolverhampton since he left in 1978 but tells me he may visit this month. There will be many a Wolves fan who would love to see him back at Molineux, where he left great memories.