Didn’t I Use To Know You? 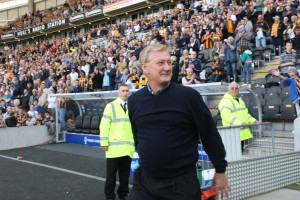 We at Wolves Heroes just love to tell the stories of Molineux favourites to their adoring masses, usually some decades on. Equally, we revel in reconnecting long-lost former team-mates, so this was too good an opportunity to miss……

Phil Parkes reckoned he hadn’t seen Jeff Wealands since the latter was unceremoniously given a free transfer and sent away on an alternative pathway that took him to Darlington, Hull, Birmingham, Manchester United and elsewhere.

But here they were again in close proximity, away from the pressures of competing for the senior goalkeeping jersey…….at the golf course, in fact.

Lofty asked us to make the introductions, unsure as he was that he would even recognise the man who, like Alan Boswell, Geoff Crudgington, Evan Williams, Rod Arnold, John Oldfield and Gary Pierce, saw him as the last formidable obstacle to overcome in order to secure a first-team place at the club.

Wealands became a very accomplished performer, making well in excess of 250 appearances for Hull and emerging as Birmingham’s player of the year in the season they won promotion back to the top flight at the first attempt in 1979-80.

At Wolves, though, he didn’t progress past the Central League side and was miffed at being shown the door by Bill McGarry in 1970 after supposedly being watched by the manager in only one game.

“You were just a kid when we were together at Wolves,” Parkes reminded him last night over a beer and, in Wealands’ case, a cigarette. “I was a few years older than you and am guessing you were still in your teens when you left.”

“There was so much competition around,” the Darlington-born 64-year-old replied. “It wasn’t a disgrace not to be able to break through there but I went from being told by Ronnie Allen that I was close to getting a game in the first team to being bombed out by McGarry just after I came back from quite a bad injury.”

And so the two chatted on, largely about Lofty’s post-Wolves years in the United States after Wealands’ smiling enquiry about what might have occured in his life over the subsequenty four and a half decades.

Phil Parkes and Jeff Wealands on a 1968-69 team photo….but do Wolves Heroes readers know the man between them?

I wondered whether there might be a gap in their memories and they may have been on opposite sides in the Wolves-Hull games during the title-winning 1976-77 Second Division season at Molineux.

Of course, no……Pierce was an ever-present in that victorious campaign and, with there being no goalkeeper substitutes or inflated match-day squads in those days, Lofty would presumably have been on reserve team duty in another town and in another 3pm kick-off.

Now they have refamiliarised themselves with each other, they will be well advised to keep their eyes open on their respective travels, though.

Parkes, happy traveller that he is, has just had to turn down a free golf week in Benidorm due to being otherwise engaged but includes Florida on his list of favoured destinations.

And that’s a frequently visited sun spot in the life of a man four years his junior who has done well enough in business as to basically be able to ‘winter abroad’…….usually on the Gulf Coast of America until just before Christmas and in Thailand from just after.

He is a good golfer, too, clearly more at home than the weary Parkes yesterday on the championship course at the Forest of Arden for a tournament at which old rivalries were inevitably stoked up.

Also present from the gold and black quarter were Steve Kindon, Mike Bailey and Dave Jones, the latter also accompanying Parkes to the Wolves golf day at Wrottesley, near Perton, tomorrow. If we’re stretching a point, Andy Blair and Brian Little were also part of the contingent, although their allegiances were clearly much more towards Aston Villa despite their brief Molineux stays.

Bailey, who was at Wolves’ recent home victory over Charlton and was driving home late last night to make sure he was at The Valley for the visit of Rotherham this afternoon, also briefly chewed the fat with Wealands before dinner and jokingly referred to staying one step ahead of Albion’s Ray Wilson……’because he will probably try to kick me again.’ So many faces in one room….faces who are nowhere near as familiar to one another as they used to be…..

The guest list was impressive. Malcolm Page, Jeff Kenna, Paul Peschisolido, Maik Taylor and Mick Harford were also there in what might be described as Blues colours, the Solihull-based Peschisolido recalling with a smile the ‘banter’ he used to receive from Wolves fans and saying he watches most of his football these days at West Ham, ‘otherwise Karren and I would never see each other.’

He also warmed to the news that we here were good friends with Les Wilson and said he first came under his tutelage as a 12-year-old when he entered the Canadian national football set-up for the first time. “That guy should still have been in charge of the national teams over there,” he said. 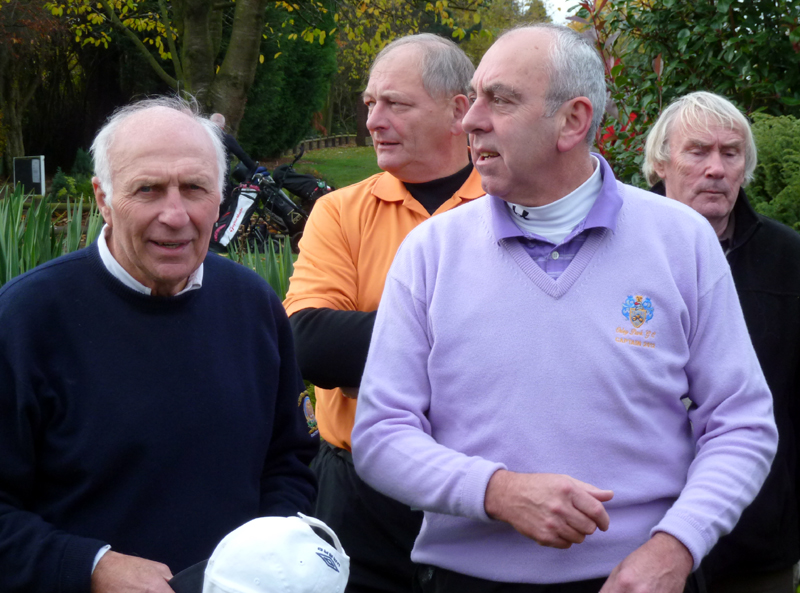 Mike Bailey, seen here with Steve Kindon, Geoff Palmer and Dave Wagstaffe at a previous golf day, is revisiting the West Midlands plenty now he is chairman of the Wolves Former Players Association.

And they are all still big team men. You might expect them to be crowded round the bar talking football with each other. Not a bit of it.

Much more important to them is getting on in smaller groups with the businessmen who have paid good money to play at their sides and who want a beer and meal with them as well as 18 holes. When it comes to competitive sport these days, they have a secondary set of team-mates, even if the relationships might be more fleeting.