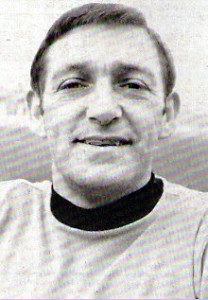 Joe Wilson, the popular Wolves full-back of the mid-1960s, has died in Australia at the age of 78.

The news was brought to us by the Cumberland Echo, who have been eulogising about his lofty standing among the legends of Workington – not surprising as he made 347 first-team appearances for his home-town club.

‘One of the great names from Workington Reds’ Football League history’ was how reporter John Walsh kicked off his obituary before using many of the quotes we had gleaned when Charles Bamforth used a business trip to Australia in the spring of 2012 to visit Joe at his home a few miles north of Melbourne city centre.

Wilson played 153 League games while at Borough Park first time round and pitched up at Molineux during the short managerial reign of Andy Beattie, who would have seen him frequently from his look-out at (relatively) nearby Carlisle in the late 1950s and who then became his manager at Nottingham Forest early in the following decade.

Joe arrived at Molineux in March of the 1964-65 relegation season, with the relegation die cast. Changes were made in goal and at right-back following the 7-4 defeat at Tottenham, his inclusion in place of Bobby Thomson bringing him a debut in the stabilising 0-0 home draw with Fulham three days later.

It was the first of five successive appearances, two of them ending in wins at Sunderland and Sheffield United, before Ken Knighton saw the campaign out in the no 2 shirt.

Wilson broke through properly the following September and played 37 out of the 42 Second Division games in 1965-66, plus all three ties the club played in the FA Cup that season.

He also figured strongly in the promotion-winning journey 12 months later, at least the first half of it, playing most of the matches up to early December, including League Cup assignments against Mansfield and Fulham.

Gerry Taylor was by now the preferred man, though, and became a regular after Christmas, leaving Wilson to sign off with his 63rd and final Wolves appearance in the 4-1 home victory over Norwich in May, 1967.

Fondly remembered as a stocky, powerful figure, he didn’t come up with any goals for the club but the fact he was very close to his 30th birthday when joining Newport that summer might account for the fact he didn’t get forward as much.

He did net nine times for Workington, though, and rejoined them in September, 1968, after 43 appearances in Division Four while in south Wales.

Readers who refer to Charles Bamforth’s exclusive interview at www.wolvesheroes.com/2012/04/08/joe-tough-guy-defender-with-a-rugby-background will see that Wilson spent more than 40 years in Australia. 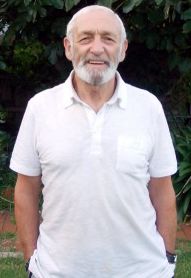 Joe, as pictured in Oz in 2012 by Charles Bamforth.

He had been suffering from dementia, having lost his wife several years ago. The couple’s youngest child, Marc, was the only one of four siblings born in Australia.

All of Joe’s Workington career was spent in the Football League, the club being replaced by Wimbledon when they slipped into the non-League sphere in 1977.

Wolves Heroes wish to send their sincere condolences to his family and close friends.