Daleys On Tour For Happy Event 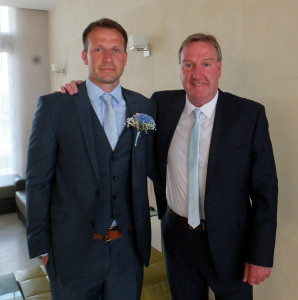 A last chance to talk tactics…..

Steve Daley didn’t make it on to centre stage during either of Wolves’ two visits to Greece. And he was happy to remain on the fringes again now during an early-autumn follow-up visit to the country.

The long-time Molineux midfielder and various members of his family have recently touched down on home soil from Rhodes, where they spent seven days celebrating their son Ryan’s wedding.

As we have frequently reported on this website, Daley is well used to being the one at the microphone but the starring role was this time carried out with aplomb by 17-year-old grandson and best man Joe who, we are reliably informed, restricted to two or three the number of times during his speech that he chose to embarrass his father!

“It was a really super few days,” Steve said this afternoon. “The wedding was on September 18 at the side of the pool and it was lovely to have plenty of members of the two families present.

“Nikki is a local girl and a very talented dance instructor, and she and Ryan had a week over there before we arrived. But everything went off well.

“I just read a few cards out but the younger ones stole it really, which was a good thing.”

The happy couple live in Pendeford and were again the toast of a turn-out of some 120 guests back in Codsall on Saturday at a reception organised for friends and family members who had been unable to fly out to the Mediterranean.

Daley had left Wolves in his British record transfer move to Manchester City by the time John Barnwell’s men went to Greece to draw 2-2 with AEK Athens in a friendly just over a month after winning the League Cup for the second time.

But he was very much an emerging star at the time of the club’s previous trip to the country – one from which a photograph is used in the Wolves All Over The World book recently produced by our sister company Thomas Publications.

And the record books show that he had to be content with a role on the sidelines 43 years ago during a winter in which Wolves were already criss-crossing Europe frequently on their way to the final of the UEFA Cup. 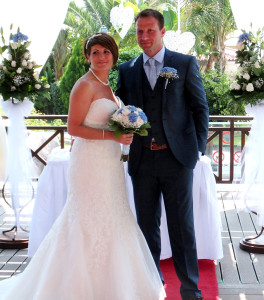 He remained on the substitutes’ bench alongside Hugh Curran as Bill McGarry’s team drew 1-1 in a friendly with PAOK Salonika on February 9, 1972 – only nine days after they had recorded a resounding victory in Jersey.

“I have no memory of that trip whatsoever,” Daley added. “If the record books say I was there, I suppose I must have been but I wish I could remember something about it!”