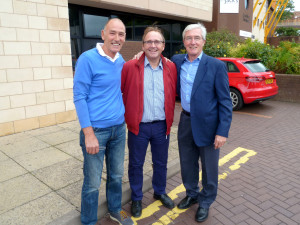 We were delighted to team up with Wolves in giving Maurice Daly a day to remember on the occasion of his first visit to Molineux for more than 35 years.

We made sure we were in attendance to welcome the Dubliner back to the ground where he made his name as a left-sided full-back and winger in the second half of the 1970s.

Wolves Heroes co-owners David Instone and John Richards were among those to greet a man who was interviewed at length by Charles Bamforth for an article we published on here several weeks ago.

John McAlle also drove in from his home near Cosford to say hello and Wolves programme editor John Hendley, who was present from the club along with fellow historian Graham Hughes, completed the reception committee, ‘Foz’ Hendley even ringing Steve Daley on the spot so Maurice could chat with another of his former team-mates.

“It was absolutely wonderful to go back to the club who gave me my big chance and where I have so many happy memories,” said Daly, who has lived for well over 30 years in Sweden and headed north for the afternoon during a week’s stay in Oxford.

“I have visited Dublin but hadn’t been back to Wolverhampton since I left Wolves at the end of the 1970s. Although Molineux has changed so much since I played here, what this visit has told me is that the club are still very close to my heart.

“The pitch looks magnificent and my first reaction is to say that if players can’t play on that, they can’t play anywhere. I know we are early in the English season and you haven’t had any bad weather here yet but it looks much different to some of the cut-up surfaces we were used to playing on.

“I guess my best mates here with the lads in my sort of age group….Norman Bell, Colin Brazier, Jimmy Kelly, Sammy Wright. I’m delighted that they had good careers – in some cases at Wolves and in others elsewhere, or both.

“I played for Vasteras for seven years after leaving, with Sammy Chung as manager for part of the time. It was Swedish League football but it was amateur.”

Maurice was accompanied on his trip over by two friends and wife Annelie, the lady he met after a Wolves’ tour game in the country that has become his home.

Molineux wasn’t the only must-see destination on his list as he descended on the town that he knew in his teenage years – and which is now, of course, a city.

“Certain things hadn’t changed,” he added. “The Mander Centre was pretty much the same and I was pleased to see Molineux Hotel, although it wasn’t how or necessarily where I expected to see it. 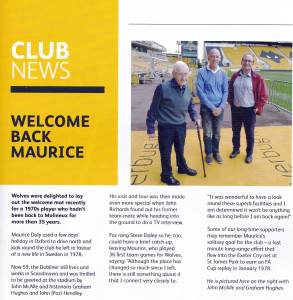 “I was in digs in Penn and Castlecroft and was in the same ones that Mike O’Grady had been in a few years earlier. Wolverhampton was a huge part of my young life and I really must return soon for a match.

“John Richards kindly offered to welcome me to a game when he was MD but my trip had to be cancelled. It was great to see him and the other guys, though, and hopefully I can come back again in the near future.”

We were flattered to be asked by Wolves to provide an account and separate photo of Maurice’s visit for use in today’s match programme (see left).