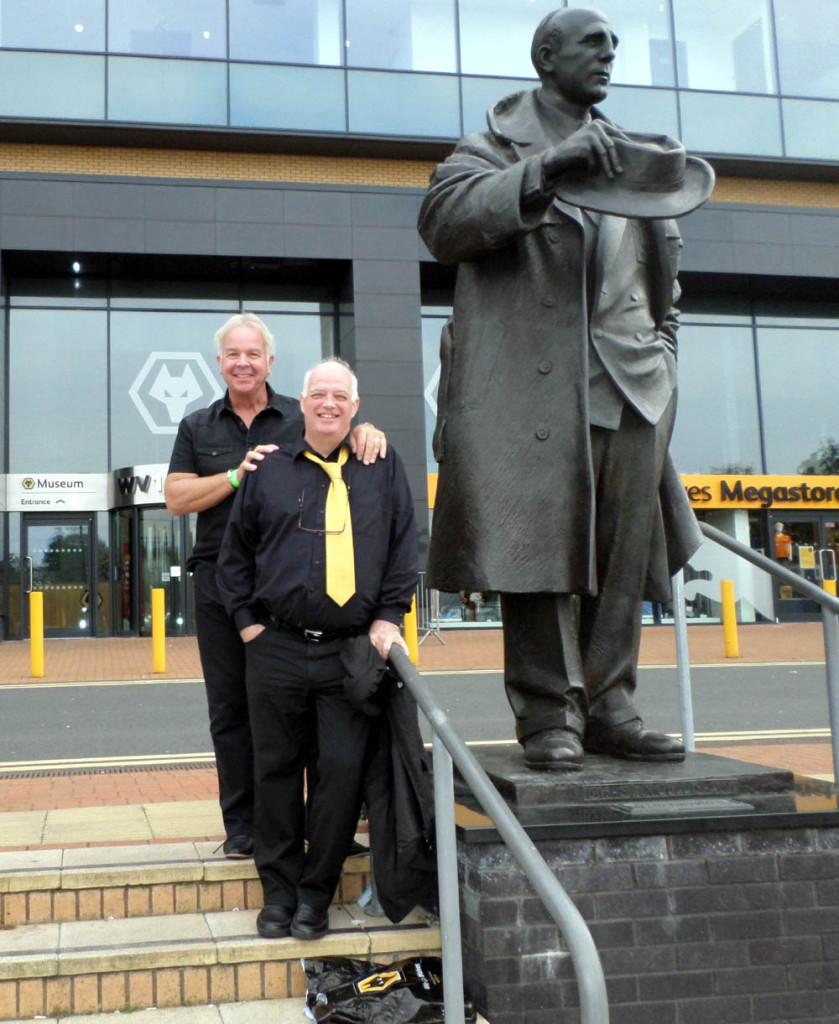 Shay Griffiths (in the tie), with his long-lost school pal Adrian Edwards.

An Afternoon To Be Remembered

Molineux was a happy place for the latest step in Wolves’ autumn improvement……even for one fan who was hoping for a Huddersfield victory.

Among the 18,166 crowd for Saturday’s second successive 3-0 victory were an overseas-based Wolves supporter who hadn’t been to the ground for more than 44 years and the daughter of a late Wanderers goalkeeper who has lived for nearly all of her life in Yorkshire.

It makes you wonder how many other stories there are hidden behind the faces on a match day.

When 16-year-old Walsall schoolboy Shay Griffiths left the ground after seeing Derek Dougan’s goal secure the club’s 1-0 home win over Burnley on the final day of the 1970-71 First Division season, he probably didn’t realise he would be away for so long.

He headed off with his parents for a new life in Norway and missed not only the run to the UEFA Cup final the following season but two League Cup final triumphs at Wembley, the 1980s nosedive towards oblivion, the entire Steve Bull era, Wolves’ first four seasons in the Premier League and countless attempts to return or make it there.

He was delighted when Dave Jones’s squad pitched up in his adopted city of Oslo in the summer of 2004 but that close-up view was a one-off for a man who has made family visits to Ireland and even dropped in on Telford after his father moved back here.

“For some reason, though, I just didn’t make it back to a Wolves game,” said Shay, who was an invaluable help to the producers of the recently published Wolves All Over The World book with his input on the club’s tour games in Norway. “It has been a long, long wait, so I just loved being at the Huddersfield game, especially as we were able to celebrate a good victory.

“The Internet has brought me closer to the club and I bought some corporate tickets for the WV1 Bar when I knew I was going to be back in England for a week.

“What a ground Molineux now is….oh my God! It was strange looking around it and not recognising anything other than the old clock but I walked over and sat at a table by the window as soon as we arrived and I had tears in my eyes. It felt as though I had come home.”

Shay, 60, remains content that he and his family have had a wonderful life in Scandinavia, where he was a successful DJ for many years, even travelling as far afield as Poland – the birthplace of his wife – and Rhodes for stints at the turntables.

He was a guest during his recent stay of his cousin Tony and family on the Walsall/West Bromwich border and accompanied his Albion-supporting host to Everton’s televised 3-2 win at The Hawthorns.

He crammed in the expected family visits as well as looking up old haunts, many of which had sadly disappeared, and there was also one other major highlight.

“I used to be best mates with my next door neighbour in Bloxwich, Adrian Edwards, who now lives in Cheslyn Hay,” he added. “But we drifted apart after I moved away because neither of us proved to be very good letter writers.

“Then I became all nostalgic in the mid-1990s and wrote to the Walsall Observer to try to get in touch again with a few old school friends. Adrian came forward and we have stayed in close touch since through emailing and speaking by phone once a week.

“It was fantastic to watch again from the North Bank, where I have so many memories of supporting Wolves from in the 1960s and early 1970s. My favourite player was Waggy – he was the reason I always wanted to play on the left wing.

“I didn’t want to leave Molineux on Saturday. I think we only left when we were told it was locking-up time!”

Elsewhere in the stadium – the visitors’ seats in the lower tier of the Steve Bull Stand to be precise – Karen Oldfield was looking out on the acres she had heard much about during her infancy.

The pharmacy technician is the eldest daughter of the late John Oldfield, who had a 19-game first-team career at Wolves around 45 years ago. We met her partner Alan Hirst when Huddersfield played at Molineux last season and were delighted to be acquainted with them both on this occasion.

Their day out from West Yorkshire stretched beyond just taking in the game. Karen was also keen to visit the club home in Fordhouses where she remembered living as a little girl.

“Alan knocked the door to ask the family there now if I could have my photo taken in front of the house,” she told us. “It was all very nostalgic and something I had hoped to do last season but I was unable to come down to that game.

“I was very young when we lived in Wolverhampton and still only eight when we moved on to Bradford. Alan has encouraged me to try to find out more about Dad’s career and his time with Wolves.

“In return, I showed him the school I went to and the shops we used, although it seems the Vine pub has gone. I remember falling over once in the beer garden there – I still have the scar on my right knee!

“My sister Dawn is very interested in football and has done bits of research, partly through the Wolves Heroes website, to learn more about Dad’s playing career. 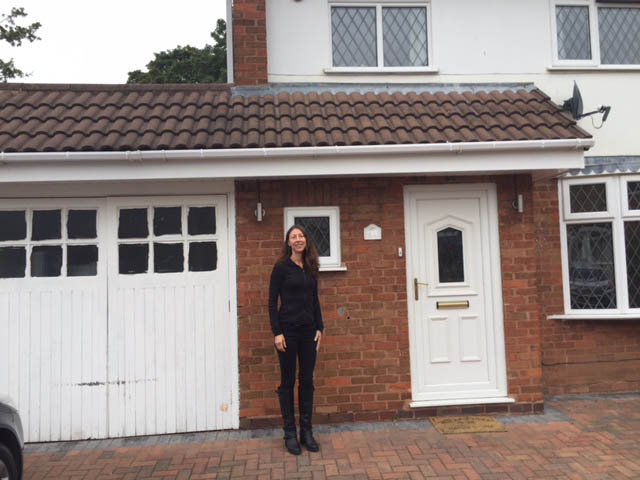 Karen Oldfield back on familiar territory.

“I know the house we lived in at Fordhouses was the one Peter Knowles had been in earlier. I think he retired a few months before Dad signed for Wolves at the end of 1969.

“I have a soft spot for Huddersfield but live in Leeds and my family are all Leeds supporters, as Dawn is. I also have an interest in Wolves, though, despite being only six when we moved there.

“It was a massive experience to go back and Alan was more upset with the result on Saturday than I was. We still had a great day and even got our faces in the Huddersfield Examiner after their photographer took some pictures of the Town fans.”