Movement, On And Off The Pitch 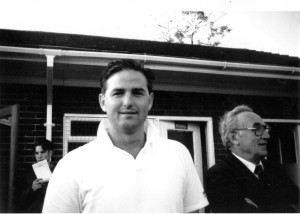 Chris Evans, with Billy Wright nearby, at a Wolves cricket match at Milford Hall in the early 1990s.

Monday, October 5: Was surprised to learn that the long-time Wolves academy chief Chris Evans had left his role as head of football operations at Derby after just under two years. The Rams again appear to have the strongest squad in the Championship, so surely they won’t mess up again, like they did under Steve McClaren. I don’t expect Evans to be out of work for long.

Thursday, October 8: An interesting fresh start for former Wolves youngster Elliott Bennett, who has joined Bristol City on loan until January 3. The 26-year-old has been short of football for his parent club Norwich since suffering a serious injury, his only two appearances for them this season coming in the Capital One Cup. Interesting, too, that Wolves are at Ashton Gate early next month.

Monday, October 12: Have promised myself that I will be at the funeral a week on Friday of Brian Daniels, the Molineux season ticket holder who has passed away following a short illness. Brian’s flat in the Newbridge area of Tettenhall was a gold and black shrine as he was a wonderful patron of the club shop as well as a top supporter of any of Thomas Publications’ various Wolves-related projects. John Southall, a youth player at the club in the early 1960s, will be there, too, having shared many a Friday morning coffee with him in the city after their respective shopping duties.

Saturday, October 17: Watched with interest on the Football League highlights programme as Sylvain Ebanks-Blake scored a good goal to help Dean Saunders’s Chesterfield to a surprise win at Walsall. The former Wolves striker cut a dejected figure when he played at the Banks’s Stadium late last winter for a Preston side beaten there with Wembley one step away in the Johnstone’s Paint Trophy.

Monday, October 19: Heard the sad news of the death at 77 of Graham Brown, who for many years ran the Wolves Lottery. Graham was a good friend and occasional ‘hotelier’ to Mike Bailey and headed up an organisation who famously provided the funds when Andy Mutch was bought from Southport in 1986. Another behind-the-scenes stalwart, Geoff Blackwell, who was part of Ron Jukes’s scouting team in the second half of the 1980s, passed away earlier in October, aged 80.

Wednesday, October 21: Was delighted to bump into Fred Kemp and his wife Glynnis near the Stan Cullis statue before tonight’s home game with Brentford. They are becoming frequent visitors now their son-in-law John Marshall is the club’s head of recruitment. Jim Barron used one of the press box seats this evening in his work as an Everton scout and Andy Thompson, as usual, was on radio duty.

Thursday, October 22: The disappointment we have felt at recent Wolves results must be compounded among those who travel so far and spend so much to watch the side play. On Monday, I had coffee near Wolverhampton Station with Odin Henrikssen, who had flown over from Bergen to see the defeat at Derby the day before and attend the MK Dons v Blackburn game the same weekend. Last night, Per Magnar Meyer, who comes from the same Norwegian city, was at the game against Brentford. 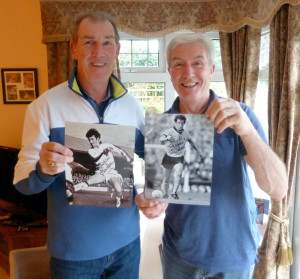 BR and JR, with signed photos.

Saturday, October 24: Was delighted to break my journey to today’s Wolves v Middlesbrough game by dropping in at John Richards’s house and meeting Billy Rafferty for the first time since the 1970s. Billy and wife Elaine are down from Carlisle for two nights to take in this evening’s Daventry Wolves dinner. En route, they called at Sainsbury’s in Perton to buy some chocolates for their hosts and found themselves face to face with none other than Steve Daley.

Wednesday, October 28: Bumped into ex-Wolves manager Dave Jones and his wife Anne in Bridgnorth during a stop-off while returning from three days’ break in South Shropshire. That is home to them while the job-seeking process continues for him.