Keeper Picks Up A Backpass!

Revealing Look At A Long And Varied Career 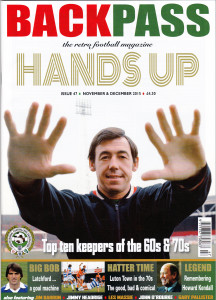 Jim Barron is the latest Wolves man to be featured in depth in the columns of the country’s top football nostalgia magazine.

No fewer than three full pages are devoted to the north-easterner who, at Molineux in the 1960s, took his first steps as a professional goalkeeper.

Barron, an FA Youth Cup finalist for the club early in the decade, played only a handful of Wolves first-team matches as he emerged from the shadow of Malcolm Finlayson and Fred Davies.

But his stay was also marked by the bizarre occurrence of switching sides and turning out for opponents Chelsea when they and Stan Cullis’s side were island-hopping together in the Caribbean a few months before the manager’s controversial dismissal.

The lengthy article is written by lifelong Molineux watcher David Harrison, who was the Wolves correspondent of the Express & Star in the early 1980s when Barron’s services as a coach were retained to good effect by the incoming Graham Hawkins.

It also gives an unprecedented insight into some of the darker times in the life and times of the 72-year-old – including the loss of a finger in an accident after he left football to earn a living in an altogether more hostile environment.

That was hardly a convenient development for a man who went on to successfully include goalkeeper coaching in his long career in and around the posts.

But it was nothing to the personal tragedy that took over his life almost two decades ago – a road smash that caused the death of a loved one and his imprisonment.

There was also a life-threatening condition that befell him on holiday, so the long service to the game that continues these days with scouting work for Everton has certainly had more than its share of personal torment.

The November/December issue of Backpass, which has Gordon Banks on the front, is number 47 and contains several other stories or references of a Wolves flavour.

A tribute to Joe Wilson is included in a comprehensive obituaries section that also has posthumous pieces about the likes of Ron Springett, Graham Leggat and footballing cricketers Brian Close and Barrie Meyer.

In addition, there is a colour photo of Peter Knowles, as it appeared on the front page of a yesteryear magazine.

…how the relevant piece is introduced.

The glossy 64-page magazine costs £4.30 and is best purchased by subscription, especially when it may become less available on certain book shelves in the coming months.

Please click on the icon on the right for further details and bear in mind that it is sold outside Molineux by Kelvin Weatherer at his stand near the subway on match days.