Mel In A Spell 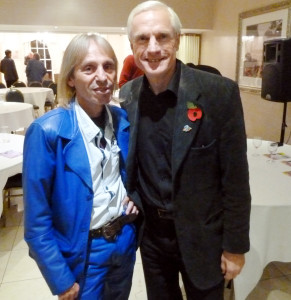 Mel Eves has spoken of his awe at working close up with the Frenchman who has been lighting up his early November nights.

But the foreign visitor has nothing to do with the former Wolves forward’s chosen sport – in fact this astonishing character is more likely to be seen climbing the walls of Molineux than gracing the famous turf.

The one-time grammar school boy has been acting as compere for three evenings of speaking engagements being undertaken in the area this week by the legendary ‘Spiderman’, Alain Robert.

A Google trawl will reveal much more about this 53-year-old phenomenon but you might have to be prepared to do some reading. Putting Wayne Rooney’s name into the search engine throws up 38million stories. Write in Robert’s name and 73million entries appear. This guy is seriously famously worldwide.

“He is absolutely unbelievable,” Eves said as the Midlands leg of the tour was completed in Wolverhampton’s Ramada Park Hall Hotel tonight.

“The things he does are simply breathtaking. He basically spends his time climbing skyscrapers, gorges and other iconic buildings – all without ropes, a helmet or safety nets and all despite the fact he suffers from vertigo and is 66% disabled.

“I got involved in being MC because I have been friends for many years with his manager, Bryan Yeubrey, who, like myself, lives in Wolverhampton and has worked for a long time as a players’ agent.

“We had 70 or 80 in on the first two nights – at Bridgnorth on Sunday and Lye on Monday – and kicked off with some films about his climbs.

“He then talked about his life and escapades and, after an interval, we went into a question-and-answer session. The format worked very well and they have been really good nights, about two hours long in all.

“I had heard a bit about him and seen some You Tube clips but it has been an eye-opener to meet him and discover how humble he is.

“I have had loads to do with young footballers and the ones we feel we would like to get hold of and have a word with are those who have a fear of failure – or even a fear of success in some cases – and those who think they have done loads and made it when they haven’t.

“Alain, or Mr Robert as he calls himself, is utterly extraordinary but doesn’t think he is. He is very natural and comfortable around people and it has been a pleasure to be working with him.” 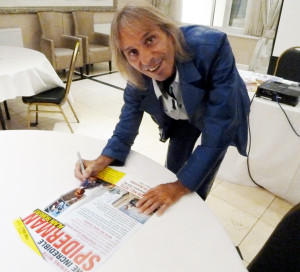 As well as being introduced by Eves at Bridgnorth Town Hall, Sadler’s Brewery and a venue more familiar on the Wolverhampton social scene, Robert has recently been featured on The One Show and even lined up next month for a prestigious speaking assignment at the Oxford Union.

Currently resident in Bali, he has made daring ascents all over the globe – some of them illegal, unauthorised ones that have led to his arrest and landed him in jail.

Tonight, when questioned by a guest, he named San Francisco as the best prison he has spent nights in and Kuala Lumpur as the worst.