Ron On His Experiences Against Powerhouse Duo 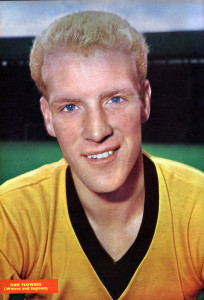 Of Wolves and England…..

The 49-cap Wolves wing-half made his international debut against Tuesday’s Wembley visitors France – in the city tragically rocked by more atrocities last night.

In a far cry from today’s protocol, he learned of his call-up when Peter Broadbent woke him one morning at the digs they shared to show him the headlines in the Daily Express.

But that 1955 blooding in a 1-0 defeat for a side also containing Bert Williams, Billy Wright and Dennis Wilshaw was hardly a happy event in a long career with his country that reached as far as the 1966 World Cup finals on home soil.

“I had a pretty good season with Wolves in 1954-55 but soon noticed a big difference with England when I played for them in Paris in the May,” Flowers said this afternoon. “It really opened my eyes.

“I was used to playing passes inside or over the full-back for Johnny Hancocks and Jimmy Mullen to run on to because they were fast, raiding wingers.

“But, when I did the same for Stanley Matthews on my England debut, he just looked at me and told me to play it to his feet next time. His style was to take it round the full-back because he was so good at it. He was the master of the dribble.

“Walter Winterbottom obviously wasn’t too impressed either because I had to wait a long time for my second cap.”

The other two games on that close-season tour were in Madrid and Oporto, with Portsmouth’s Jimmy Dickinson preferred in the no 4 role for both the draw against Spain and 3-1 defeat against Portugal.

Bill McGarry also had a brief run in the role while Flowers returned to his club to help them win another League title and there were three and a half years in between the blond Yorkshireman’s first and second caps.

Once back in, though, via a 2-2 draw with Wales at Villa Park for which England trained at nearby Lilleshall, there was no shifting the Wolves player.

He played in all of the next 40 internationals, albeit as a substitute for Wilf McGuiness in one of them – a friendly defeat in Mexico City later in 1959.

And that long run took in another game in Spain (this time lost 3-0 in Madrid), a 4-2 win in a return against the Spaniards and the 1-1 Nations Cup draw with France at Hillsborough that marked the England debuts of his Molineux colleagues Alan Hinton and Chris Crowe. 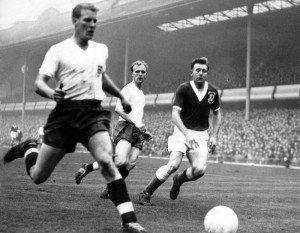 Ron Flowers in action alongside Wolverhampton-born Don Howe in the wing-half’s comeback game against Wales at Villa Park in 1958.

Flowers, who scored from a penalty in that latter fixture, lined up as well when the French impresively took Wolves apart 5-2 back in Paris in the second half of 1962-63.

And he still chuckles at the message the management usually had for him when he reported back to Molineux after duty with his country.

“Stan (Cullis) used to be on at us, even to Billy, with the comment: ‘Hey, you aren’t playing for England now.’ In other words, we had to play his game.”