Wayne Pain At Missing Out 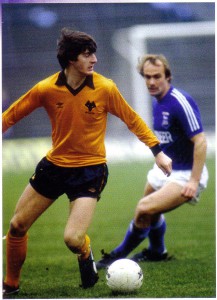 Wayne Clarke in action against Mick Mills and Ipswich.

We at Wolves Heroes have told before how Wayne Clarke said no to Brian Clough in favour of making it big at Molineux – now we can reveal a second rejection to Ol’ Big Head.

The programme for the Wolves v Leeds top-flight game 37 years ago tomorrow refers to the striker having been earmarked for a trip to the Canaries that autumn with an England youth team then managed by Clough.

Although only 17 at the time, Clarke had recently made his first-team debut and played most of the eight matches he was to appear in during that breakthrough 1978-79 season for him under Sammy Chung and then John Barnwell.

“I can’t remember whether I was actually selected in an England squad or sounded out about it but I was aware Cloughie wanted me on the trip,” he said today.

“I would love to have gone and played because we were close to him as a family. As well as when he met my parents and me when he was trying to sign me for Nottingham Forest in my early teens (please revisit https://www.wolvesheroes.com/2011/10/29/why-wayne-said-no-to-clough/) , he made sure many years later he looked after our Allan, who had been the only one to stand up for him in the dressing room when he was appointed as Leeds manager.

“Brian helped him out with a few youngsters who were part of Barnsley’s promotion in the lower divisions and that obviously helped Allan get the Leeds job in the early 1980s.

“I seemed to have a knack of doing well against Cloughie’s Forest teams and would love to have played for him, even briefly at international level. Sadly, it wasn’t to be.”

Before Wolves’ 1-1 home draw against Leeds on November 18, 1978, in which Clarke did not play, the club sent an apology stating the talented forward could not be released as he was in and around their senior side.

Clough reportedly messaged back, saying he understood the situation, the player having scored twice in seven reserve matches at the time but none in the first team.

Clarke did play some international football that same autumn, though. Having previously won many schoolboy caps, he had taken part in an international youth tournament in Monte Carlo.

“The squad were under the control of John Cartwright, who was at Crystal Palace at the time,” he added. “Clive Allen was there, having also played alongside me for the schoolboys, and I think Gary Shaw and Brendan Ormsby were two others.

“I wish I could remember more but I have a photo taken of the squad in Monaco and the loft probably contains a programme or two and a shirt from when we played there.”

Clarke stated his wish to be close to home as his reason for choosing Wolves over Forest and was by no means upset when Barnwell explained why he was having to reject a £100,000 offer for him from Alan Hinton’s Seattle Sounders some years later.

“Kenny Hibbitt ended up going to Seattle, so maybe Barney put a word in for him,” he recalls. “I was told Bari were also after me when I was at Birmingham. 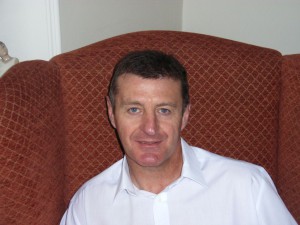 Hasn’t changed that much, has he?

“This was well before they signed David Platt and Paul Rideout but I was always a home bird and had no interest in even thinking of playing abroad until I had made a proper mark in this country.”

* England finished fourth in the Monaco tournament, having beaten Portugal 2-0, drawn 1-1 with Yugoslavia and Spain and lost 2-1 to Italy.