Secrets Of How Our Targets Are Tracked Down 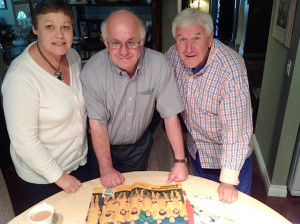 Diane and Charles Bamforth at the Vancouver home of Les Wilson in 2013.

You might have thought that living and working in California would be a substantial barrier to his ambitions of tracking down some of those he relished watching in his past life as a Molineux regular.

But the man who once turned up unannounced on Joe Wilson’s doorstep in Australia and used the same trip to have lunch with Dave Maclaren and enjoy a beer with Alun Evans is clearly not that easily put off.

And he has now located another former Wolves man Down Under – a player he remembers watching in Wolves’ reserves in the 1960s and who went on to cross paths elsewhere with Derek Dougan during a lengthy career on either side of the touchline.

“I had been intrigued by the post-Molineux life of Brian Thompson for decades and was always keen to know why he hadn’t made it at the club,” Charles told us in a Skype chat this week.

“This site has managed to tell us so much about so many of those we remember from first-team football but my interest also stretches to those who didn’t quite reach the senior side.

“There are some wonderful stories to be told, hard-luck tales sometimes, and I have been very fortunate to have the chance to talk to these guys and put to them questions that I really wanted to hear answers to.”

So how did he find Thompson, a man so distant from Molineux these days that he has just asked us to reconnect him with old mates such as Evans, Les Wilson and Doug Griffiths?

All that was generally known about him was that he had settled in Australia after his playing days were followed by service with Rushden and a link-up with The Doog just up the road at Kettering.

“At any time, I basically have a list of ex-Wolves players whose whereabouts are not generally known and who I will periodically try to seek out,” Charles added.

“Twenty years or so ago, we would basically have been checking directory enquiries or BT white pages to try to find a phone number – the route which paid off when we found Clive Ford in 2011.

“Now, thanks to the Internet, there are other avenues. I caught up with David Wintersgill through Friends Reunited and have found Facebook useful more than once.

“I had been chasing Brian Thompson ever since Wolves Heroes started really. I was just so curious about him.

“I tried him on Facebook, through various Google searches and in telephone directories in the Sydney area. Various things came up as leads but I struggled to locate him because he didn’t seem to be involved in football once he arrived in Australia.

“I tried putting his name into a search again a few weeks ago and something popped up with a Black Country Bugle article and a guy called Terry Church in Wall Heath, near Kingswinford, who had written a book about sports personalities from his area.

“He referred to having played cricket with Brian in their younger years, so I contacted him and, as chance would have it, they had stayed in touch.

“Terry was able to provide me with an email address in New South Wales and I plan to chat by phone with Brian in the next few weeks for a proper interview.

“It’s strange how things work out and you can chase someone through lists on the other side of the world and finally get a breakthrough thanks to a contact a few miles from Wolverhampton!

“I finally turned to looking through phone number lists in southern Sweden after deciding there were not likely to be many M Dalys over there…..there were loads of them in the phone books in Ireland!

“Fortunately, I am very persistent and don’t like to give up. When I was going to Australia on business a few years ago, I made plans to go and see Joe Wilson, Dave Maclaren and Alun Evans but struggled to make contact with Joe after I landed, so I just turned up at his door.

“There was a sign basically saying callers were not welcome but I thought: I have travelled all this way……I have to see this through.

“He answered and we had a delightful hour or two chatting away. On the same trip, I had a wonderful lunch with Dave, who I had been unable to track down when I wrote a book about Wolves goalkeepers in the early 1990s.

“Then Wolves Heroes put me in touch at short notice with Alun Evans, so I could have a beer with him. Meeting these guys is a serious passion of mine…….I am a lifelong Wolves fan and suppose I have proved I will follow them to the ends of the earth!” 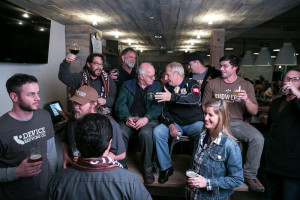 Charlie has also spent time in Vancouver with Les and Lois Wilson and met up with the likes of Jimmy Kelly in Oregon, Chris Dangerfield in San Jose and David Cooke at Heathrow on one of his frequent trips back to the homeland.

He adds: “Usually, I interview by phone or through Skype, which is a marvellous invention and has meant I can talk to a former player without breaking the bank.

“But I naturally like it best when I get to meet these guys – which I will in the case of Brian Thompson in March when my day job takes me back to Australia. We have already set a date to Skype in the meantime.”