Bailey Book Is Here For Christmas 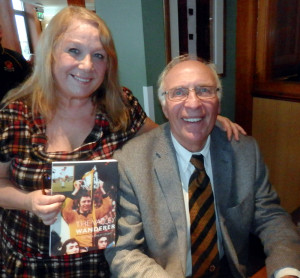 The 256-page soft-back is a substantial effort, owing much to the research skills of Clive Corbett, who had already made a considerable mark in literature about the club with Those Were The Days and Out Of Darkness publications.

The Valley Wanderer was launched in the hours before kick-off against MK Dons yesterday with a signing sesion at the Blue Brick pub among the London Wolves fraternity with whom the long-time Molineux captain is so friendly.

As the title suggests, the book not only charts his highly influential decade and a bit here in the West Midlands but also his time before that with Charlton and England – and the managerial career that followed with Hereford, Charlton and Brighton.

The statistics at the back show that Bailey made 169 first-team appearances (with 22 goals) at Charlton and then nearly three times that many at Molineux from 1966.

It is a decades-old lament in these parts that further England recognition eluded him while at Wolves, where he is widely regarded as the best skipper the club have had since Billy Wright.

But how did the move north come about for a Norfolk-born player who had followed up his under-23 honours by playing twice in the England senior team?

“My first experience of playing at Molineux was the previous November, when I was in the Charlton team that drew 2-2 there,” he writes.

“I knew Ernie Hunt from sharing a room with him on England under-23 duty. He had joined Wolves a few months earlier and I knocked on the dressing room door to try say hello to him.

“Ernie called me in and asked me to sit down, saying: ‘I like it here.’ What really impressed me, though, was the crowd. Hughie McIlmoyle played up front and they made a tremendous noise every time Dave Wagstaffe or Terry Wharton fired in a cross for him.

“The crowd really got behind the team and I knew I wanted to play in games like this every week. I definitely think the supporters improved my game. I couldn’t wait to get on the pitch.”

We learn that Ronnie Allen also sewed a seed on a day on which Bailey and Ron Saunders were on the score sheet for the Londoners against efforts at the other end by McIlmoyle and Hunt. The manager spotted this visiting presence in the dressing room and asked him: “How would you like to play with these lads?” 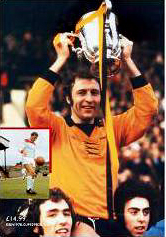 The famous image to look for….

Little did the 23-year-old know that he would be transferred at the end of that winter, the day before his 24th birthday.

The Valley Wanderer (Geoffrey Publications) sells for £14.99 – we at Wolves Heroes have more details for those who wish to ring (07734-440095) or email for further details as to its availability.

It is the second new book on the club to hit the shelves in time for Christmas after Thomas Publications came out with David Instone’s Wolves All Over The World hard-back.