Those Never To Be Forgotten Nights….. 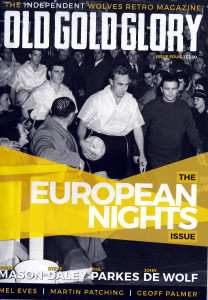 Issue four of Old Gold Glory is now out – and will be on sale at Molineux for Friday’s Wolves v Nottingham Forest clash.

The publication packs a heavyweight punch, well stocked as it is with columns by Wolves players and professional writers.

‘European Nights’ is the theme, so step forward Geoff Palmer and Mel Eves, two men well versed in the art of doing battle with sides from across the Continent.

Eves scored the last goal Wolves came up with in a major European tournament – a second-leg Molineux winner against PSV Eindhoven that went close to turning round a UEFA Cup assignment against the Dutch club in the wake of the 1980 League Cup final triumph.

And Palmer established himself in the side in the first League Cup winning campaign of 1973-74 – the gateway back into Europe for the club after their thrilling journey to the UEFA final in 1971-72.

This 48-page magazine is proving expert at reaching those from inside the dressing room in decades past.

Graham Large has conducted an in-depth interview with one of the veterans of the 1950s floodlit nights, Bobby Mason – a man who also played in 11 European matches and scored no fewer than five times, including a brace against Red Star Belgrade.

And Phil Parkes opens up to the editor in a three-page article that is followed by a piece to which Jason Guy also contributes in a new Foreign Imports section. First under the spotlight is Dutchman John de Wolf.

Elsewhere, Steve Daley talks readers through that 1971-72 criss-crossing of Europe while there are contributions from Martin Patching, former Express & Star trio David Harrison, Steve Gordos and David Instone, and Clive Corbett, editor of the just-published life story of Mike Bailey. 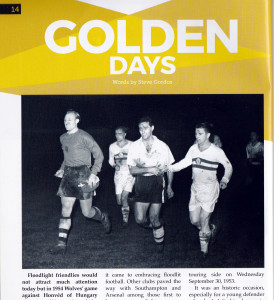 Did Wolves and their fans ever feel prouder than they did on this night?

This attractive glossy publication is completed by obituaries on Danny Hegan and Des Horne, an article from Kelvin Large, a fan focus and a sprinkling of evocative photos in strict keeping with the theme.

It costs £2.50 and is available through the www.oldgoldglory.co.uk on-line shop. Graham Large can be emailed on graham.large@media73ltd.com

The next issue is due out in January.