Some Hate It Hot

How Kindo Cracked ‘Em Up And Got A Desert Island Mention 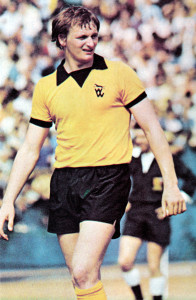 Steve Kindon in the manageable heat of a Wolves pre-season game.

Talk of Steve Kindon’s summer engagement in Azerbaijan has led to recollections of an even more obscure trip back in his playing days.

The powerful former Molineux forward made an after-dinner speaking trip to Baku several months ago and further indulged his passion for travelling to ‘these far-flung places’ by dipping his toe in the Caspian Sea while he was there.

But the venue is almost mainstream compared with one he went to around 40 years ago in the company of various other Wolves men.

“I was part of the squad when a Jimmy Hill International XI went to Sudan to play some matches,” he said. “It was a party drawn up from different clubs with the main aim of going to do some coaching with the locals.

“Frank Munro and Derek Jefferson were there, too, so were Danny Hegan and Bob McNab, although I’m guessing those two probably weren’t with Wolves at the time, as I know we had Bob and the other Arsenal full-back Pat Rice playing together.

“It was some time in the mid-1970s and perhaps the reason Wolves were so well represented was that Jimmy got on well with Bill McGarry.

“I’d imagine Jimmy either rang him up with specific individuals in mind or asked if he could have two or three players to cover certain positions.

“Among the other players I recall being there are Johhny Haynes, who flew up from wherever he was in South Africa at the time, and Tommy Baldwin, who most of us will remember best from Chelsea.”

The Hill XI were to face the national team in the capital, Khartoum, and were wrongfooted by a crafty manoeuvre from their hosts.

“It was red hot and, as if we weren’t struggling enough to acclimatise, they brought the kick-off of the game forward to 3pm,” Kindon added.

“It was 135 degrees and they beat us 3-0. Many years ago, my mother rang me up to say I’d had a mention on Desert Island Discs and it turned out it was a story from when we were travelling back to the hotel after the game.

“We were all a bit despondent, as well as completely shattered, and were sitting in a line on this military vehicle….all with our backs to the side windows.

“I could see the mood was low, so, as one of the jokers in the pack, I just said: ‘Never mind, lads, cheer up……at least the weather has been nice.’

“Someone giggled and, within two or three minutes, the whole squad collapsed in a fit of uproarious laughter. When we got off, Danny Hegan said to me: ‘You’ll never know how funny that was.’ 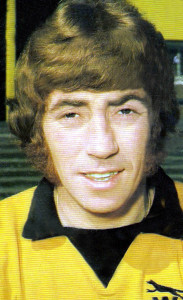 “It was Jimmy Hill who recalled it when he was on Desert Island Discs and the presenter asked him to recall the funniest memories from his career.

“Our mood on the trip soon improved. It was only 90 degrees when we kicked off in the re-match at 8pm a few days alter and we won quite easily.”

Kindon celebrates his 65th birthday on Thursday and signs off his speaking engagements for nearly a month by choice when he appears at a function near Coventry tomorrow.