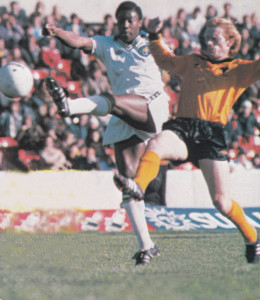 Willie Carr tussles with Terry Connor at Molineux in October, 1980.

Wolves found one unlikely scoring hero and overcame the expertise of another when they recorded a precious victory against tonight’s opponents more than 35 years ago.

Terry Connor, destined to become a Molineux coach many seasons later, used the visit of his beloved Leeds to the West Midlands on October 18, 1980, to plunder a headed goal after only 55 seconds.

The breakthrough left John Barnwell’s squad of League Cup heroes on the ropes at a time when they had won only two League games, seen their grip on the silverware broken by Cambridge and also gone out of Europe at the first hurdle against PSV Eindhoven.

But, on the sunny afternoon on which young full-back John Humphrey made an assured home debut, one of his mentors at the back stepped forward to help Wolves turn it round and register the victory which saw them leapfrog their visitors.

Emlyn Hughes had not experienced the best of weeks, with a Friday morning visit alongside Richie Barker to an FA commission in London seeing him pick up a three-match ban after collecting seven bookings.

His points tally was higher than he had accumulated in the rest of his career combined – and certainly greater than Wolves had on the board in the two-month old campaign.

Thankfully, his suspension would not start until the following Tuesday, so he was free to face the Leeds side newly under the control of Allan Clarke and then sit out visits to Leicester and Tottenham and the home game with Sunderland.

And it was Hughes, the man who had lifted the League Cup at Wembley seven months earlier, who restored parity against Leeds as he struck just before half-time with his first goal for the club.

The equaliser was a big relief to Wolves. They had already squandered the first few in a long line of chances, with Humphrey – blooded in two away games the previous season and also given a place in matches at Southampton and Norwich early in 1980-81 – among those denied by the excellence of John Lukic.

Wolves, whose reserves won 4-0 at Elland Road on the same day, kept plugging away, though, and the decider in a 2-1 win came thanks to a characteristic turn and shot by John Richards in the 56th minute.

It wasn’t the most famous victory by that scoreline that Wolves have ever achieved against the Yorkshiremen but it left Barnwell much more content as he sipped on his celebratory post-match Scotch, although his side, like Leeds, were still in the bottom seven of a table which had Ipswich as leaders and Manchester City at the bottom.

There was one other significant landmark in the game, which came at the end of a week marked by an unsuccessful Wolves move to sign Bolton’s Peter Reid.

Willie Carr, one of the midfielders who would have been helped and/or threatened by the arrival of a man who went on to achieve great things with Everton and England, was playing his 200th League game for the club. Wolves 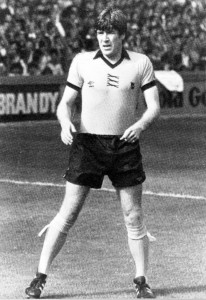