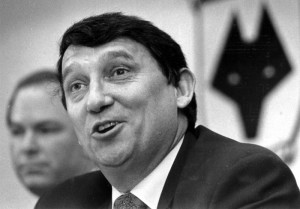 Graham Taylor holding court at Molineux, with Jonathan Hayward in the background.

Graham Taylor is the subject of a ground-breaking TV programme to be shown early in the New Year.

The full half-hour slot on Premier League World is being devoted to the career of the former Wolves and England manager after he was interviewed by them at length.

The programme is due to go out at around 6.30pm on BT on January 6, with broadcasting planned on Sky Sports as well.

The half-hour is usually filled by an assortment of magazine-type items but the show’s producer, Andrew Catcher, said: “Given the content this time, we decided to run this all the way through.

“We were very pleased to be granted sit-down access to Graham for a good while and think football fans will be very interested to hear what he has to say – and about parts of his career that they are perhaps not so familiar with.

“The programme is documentary-style and normally concentrates more on off-field matters than what happens off it but there is an insight to his playing days as well as all his years as a manager.

“He obviously covers his time at Wolves and talks of having found it a necessary step back into club football after his time with England. 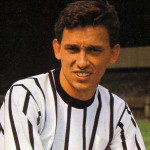 GT as a Grimsby player.

“There are some good shots of Molineux and a nice picture from when he signed Steve Froggatt, so we think it will be of great interest to Wolves supporters.”

Taylor, having left England the previous November after they failed to qualify for the World Cup finals in America, was in charge at Molineux from March, 1994, to November, 1995, his one full season having taken Wolves to a losing appearance in the First Division play-off semi-finals.