Fabulous Career That Was Robbed Of Its England Glory 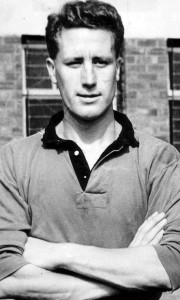 To the long list of 1950s Wolverhampton Wanderers greats, we are also thankfully able to come up with a second roll of honour…..

Bert Williams would definitely be on there, so too Malcolm Finlayson, Bill Slater and Dennis Wilshaw, and you would find places for Eddie Stuart, Jimmy Mullen, Ron Flowers and Peter Broadbent – grouped together as proprietors of town centre businesses.

They are men who followed up outstanding playing careers by also doing well for themselves in later life, without relying on long-lasting work in the game.

Happily, Roy Swinbourne very much belongs to that group; in fact, he would be up near the top of it.

What an impact he would surely have gone on to make had he not suffered a damaging injury in a game at Luton on Bonfire Night afternoon in 1955 and then pushed it beyond repair at Preston a month later.

That Swinbourne was at the very peak of his powers when he was stricken just added to the cruelty of the situation. He had opened 1955-56 with a goal in the first-day draw at Albion and hit four in the Molineux slaughter of Manchester City a week on.

Hat-tricks in huge wins over Cardiff and Huddersfield on the next two Saturdays swept his tally into double figures by early September and there was time for braces against Chelsea and Manchester United before that wretched, fateful sidestep around or over some young boys sitting on the grass near the pitch’s perimeter at Kenilworth Road.

A recovery of sorts from a muscle problem left him able to return for the League game at Preston on December 3, only for a challenge with Tommy Docherty when he did not consider his leg to have properly re-strengthened to condemn him to a long, lonely and difficult battle to save his career. All that after a magnificent run of 17 goals in the first 11 matches.

With cartilage and cruciate trouble, his knee was in a mess beyond the scope of surgeons at the time and not even three operations and any amount of pounding the Molineux track and pumping weights could restore it to a workable level. Not in his line of work, anyway.

If this modest man was bitter about his fate, he didn’t show it. True, the following decades were kind to him in a different way but 114 goals in 230 matches for his only League club was the sort of wonderful return that would surely have led him to a substantial contribution to international football.

Indeed, having played and scored for England B against West Germany at Hillsborough the previous spring, he was on his guard for a call to the senior side.

Powerful voices at Molineux had revealed to him that selection was close and, in a dilemma that probably wouldn’t be relevant today, he missed out on a game against Denmark only because Billy Wright, naturally, was on the trip and the selectors didn’t want to take two players out of Wolves during a weekend in which League games were being played. 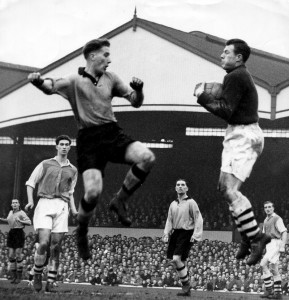 Challenging Arsenal keeper Jack Kelsey in a game at Molineux in January, 1955.

With his volume of goals that summer and autumn, on top of his impact against Europe’s finest in floodlit friendlies, he thought he would be on the flight to Copenhagen but heard on radio that Bolton’s Nat Lofthouse had been named instead.

Sadly, Roy’s opportunity never came but he was more inclined to see the funny side of his fortunes when the Express & Star’s John Lalley and I spent an hour or two with him at his and wife Betty’s lovely home near Kinver around a decade ago.

“What I do remember is Stan Cullis chatting to me as I stepped out of the shower one day at that time when I was scoring plenty of goals,” he said.

“He asked how old I was and, when I said I was 26, he remarked that it was time he needed to be looking for a replacement, then!

“It seemed odd as I thought I had a good few years left but no doubt it was his way of making sure my feet remained on the ground.”

Swinbourne’s quiet Yorkshire tones will be fondly remembered by those who knew him but it was only through circumstance that he was born in Denaby Main, near Doncaster, on August 25, 1929.

His dad Thomas was from Aston and made it as far with Villa as their reserve team. He married a Worcestershire lady but was manager of Midland League side Denaby United when Roy arrived in this world – hence the possibility of an altogether different career path being followed.

Major Frank Buckley was manager of Third Division South Notts County in the mid-1940s following his long and highly successful Molineux vigil and homed in on the talented 14-year-old after a Sheffield and Hallamshire District trial match in which he had impressed initially as a right-winger (his position as a boy) and then when switched to inside-right.

All the talking during the Major’s home visit was reportedly done by the senior figure in the household. He had already decided his boy would go to Huddersfield, only for Wolves’ interest and for their handling of him at the Wath Wanderers nursery to change his mind and convince him he should head for the West Midlands instead.

It was five years later that Swinbourne Jnr made his initial impact in Wolves’ first team and there was a happy coincidence in the identity of the opposition when he did.

The FA Cup holders had gone ten matches without a win when, a few weeks after his 20th birthday, he was given his debut at home to Fulham. Neither that 1-1 draw nor the follow-up defeat at Newcastle stopped the rot, then came a Christmas double-header with Villa which drew crowds of 51,986 and 69,492 to Molineux and Villa Park respectively on consecutive days.

Swinbourne totalled three goals across the two matches, with his brace on the latter date doing much to set up a 4-1 victory.

He added four more that season for a side who finished as League runners-up and built brilliantly on his emergence by leading the club’s scoring charts in 1950-51 with 22 goals in League and Cup, including one at The Valley against this afternoon’s opponents Charlton and a hat-trick at home to Bolton.

He topped the Molineux marksman list again in 1952-53 with 21 – this time including trebles against both Manchester clubs – and remained on fire in the title-winning campaign that followed by netting another 24 times.

“He had great ability,” said his fellow forward Dennis Wilshaw, a man with whom he remained close friends into later life. “He wasn’t one of those blood-and-guts centre-forwards.”

Also quoted in Steve Gordos’s 2003 book Old Gold Glory, Norman Deeley reinforced the view that this no 9 was no battering ram.

“He was a class player,” the winger said. “For a big man, he had lovely control and could turn well.” Ron Flowers, another of the Wath graduates, remembered: “He had everything – good control, speed and he was good in the air.”

Had Swinbourne known he was going to score 24 goals in Wolves’ first League Championship success, including both in the win over Tottenham on the last day, he might have thought he would leave his forward-line colleagues in the shade once more. 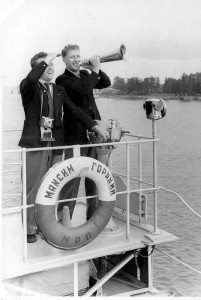 Taking control with Leslie Smith on the club’s ttip to Moscow in the summer of 1955.

Wilshaw plundered 27, though, and Johnny Hancocks also hit 24 and they, in reverse order, again led the way 12 months later as the centre-forward chipped in with another 18 of his own in what, sadly, proved to be his last full campaign.

That was also the season in which he scored two of the three goals by which Wolves hit back to beat Honved and record the most famous victory in their history. Maccabi, Spartak and the South Africa XI were others among the foreign-invasion set who felt the full force of his finishing.

Roy once seemed embarrassed when pointing out to some visitors to Molineux that it was he who had headed the equaliser and driven in the winner against the Hungarian side who were seen at the time to be as strong as any club team in the world.

So many from that era had this class. They achieved greatness, then they went off and did something else. It didn’t seem to change the way they were.

Swinbourne, who died in a nursing home near Kidderminster having suffered for several years from vascular dementia, didn’t stand out as someone who would dine out on his success. 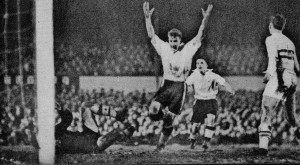 Celebrating a precious goal against Honved…..

He gave something back to the sport by refereeing for a while and loved his golf, showing in the process that his talents weren’t restricted just to playing football.

He was a golden guy among a dressing room full of favourites.