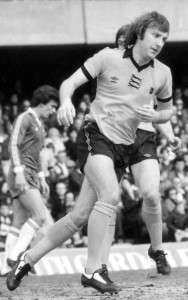 Steve Daley in action for Wolves at Chelsea.

Friday, December 4: Enjoyed calling at the lovely house of Steve Daley in Codsall, although the man of the household was out. The purpose of the visit was to seek permission for Midlands-based author Simon Goodyear to call him for help with the Peter Withe autobiography he is helping write. Barry Powell is another Wolves man who is being sounded out for anecdotes about the twice League Championship victor and European Cup final winning goalscorer.

Friday, December 11: A brilliant turn-out of former Wolves players at tonight’s televised home draw with Nottingham Forest. It was nice to say the Press Association’s Paul Jones chatting away in the media seats with Mark Burke almost two and a half decades on from when they were midfield partners. Don Goodman was there, too, in his summariser role for Sky and it was nice to have a friendly greeting with visiting manager Dougie Freedman in the interview room after the 1-1 draw.

Wednesday, December 16: Enjoyed receiving the Bobby Gould ’round robin’ today – the letter he sends to all of his friends at this time of year, updating them on the Gould family’s fortunes and whereabouts. Was particularly amused at the revelation that Bob and Marge are still heading all the way across the world this winter to spend time in New Zealand, although their son Jonathan now lives right across the road from them in Portishead after returning from Down Under to work as goalkeeper coach at Albion.

Thursday, December 17: Don’t know why but I found myself getting irritated at Molineux tonight with the former Leeds player who was summarising during commentary at an entertaining game. Didn’t like the way he punched the air and exclaimed ‘Get In’ as Leeds equalised…..aren’t we meant to behave with a little more impartiality in those seats? And what did he mean when he was saying at the end: “This win will mean absolutely nothing if we don’t beat Preston on Boxing Day.” What? He meant these three points would be taken away again?

Sunday, December 20: A few weeks ago, I was delighted to bump into Wolves’ long-time former commercial manager Gary Leaver as he and his son headed for the coach taking them to the away game against Rotherham. Today, at Knutsford Service Station, there was a surprise reunion with ex-Molineux secretary Keith Pearson – a key man in the battle to keep the club going in the mid-1980s. He and his wife were on a family visit, I was heading for North Yorkshire to see Terry Cochrane and others during two days of interviewing for Backpass. 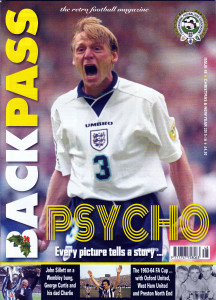 Tuesday, December 22: Talking of Britain’s finest football magazine, was flattered and delighted to see it dedicate two pages to a fulsome review of our Wolves All Over The World book. That the piece was written by my predecessor as the Express & Star Molineux correspondent, David Harrison, made it seem even more gratifying. Backpass is now almost 50 issues old and continues to be a brilliant read for those interested in football nostalgia.

Saturday, December 26: Another bumper turn-out of familiar faces at the teatime Wolves v Reading clash today…..Mick Gooding and Andy Thompson both summarising on radio, Joe Gallagher doing the Press Association duties and Don Goodman on the commentators’ gantry. Not forgetting Mel Eves, who had caught up with Joe – a former team-mate – at Birmingham several weeks ago.

Tuesday, December 29: With visiting the excellent archive library at the old Molineux Hotel, I feel like I’m stalking Wolves. Oh well, nothing changes – and hopefully it won’t in 2016!