How Perry Also Got Away 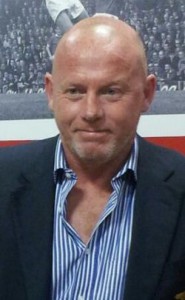 It has previously been reported how Charlie Nicholas might have become a Wolves player had homesickness not taken over and had him rushing back to Glasgow from the West Midlands.

Now word reaches us of how one of his colleagues and then successors in Arsenal’s attack was even more strongly linked with Molineux before instead making his fame and fortune at Highbury.

The We All Live In A Perry Groves World book reveals how the speedy Londoner was not only courted by those in power at Wolves but actually signed by the club in his mid teens.

A boys’ team coach included the 1980 League Cup winners on the list of clubs he wrote to on behalf of a lad who had moved out of the capital and found himself playing for West Suffolk Boys.

Presumably for geographical reasons, Colchester, Norwich, Ipswich, Peterborough and Luton were also targeted and Groves played a couple of games at Colchester before being told that Wolves would like to look at him.

“We got up at 6am and my dad took me to Sudbury and put me, clutching my little drink and some sandwiches, on the train,” Groves tells readers.

“I went by myself to Liverpool Street, across London in a taxi and then from Euston to Wolverhampton. I was met at the station by an old boy called Joe Gardiner, who took me to Molineux, where I met the youth-team manager, John Jarman.

“I spent a few days in the Connaught Hotel, paid for by Wolves, and trained with the associate schoolboys. Most of them were from the Midlands and they looked on me as an outsider turning up to take their jobs. Well, they were right there!

“Although I was nervous to start with, I soon felt comfortable. It was exciting and frightening at the same time. I was up there for three or four days, eating at the club’s training ground after training and then taken back to the hotel.”

Groves went on to become a double League Championship winner with George Graham’s Gunners, the Scot having made him, in 1986, his first signing at the club.

But a career that also contained Littlewoods League Cup glory – he made the winner for Nicholas in the Wembley final of 1987 against Liverpool and scored in the away leg of the semi-final at Everton as they progressed to a losing final against Luton a year later – could easily have taken a different course.

Back to the text and his time at Wolves: “Soon after I returned home, I got a letter offering me associate schoolboy forms – the first step on the ladder!

“Suddenly, I could say: ‘I’m Perry Groves – I play for the Wolves’. I signed, of course, and that meant I couldn’t sign or have a trial with anyone else, as if I would. So, for about 18 months, I was an associate schoolboy with them, travelling up during school holidays and the like.”

But the club’s perilous financial position at the time was to hit them – and the youngster – hard.

“In the summer of 1981, a letter dropped on our doorstep from Wolverhampton,” he added. “The first line read: ‘Dear Perry. We are sorry….’ My heart sank.

“They said that, due to financial cutbacks, they were going to have to concentrate on local boys and they weren’t going to keep me on. Bollocks! It meant I wasn’t good enough. 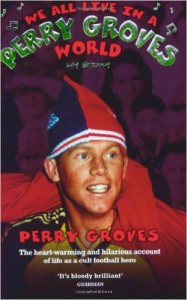 The book that reveals a surprise Wolves connection.

“It was from John Jarman, so it really was a ‘Dear John’ letter dumping me. I was devastated.”

Groves, who had cost Arsenal only £50,000 when bought after a stay of more than 150 games with Colchester, moved on to Southampton in 1992 for £750,000 but retired two years later at 28 following two serious Achilles tendon injuries.

* We are yet again grateful to the ever-supportive Charlie Bamforth for relaying this story to us after reading a life story which the former player has followed up with Perry Groves’ Football Heroes.