Striving For The Greater Good 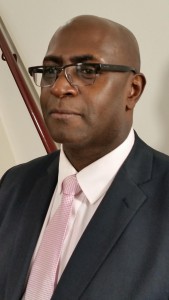 Joe Jackson – on parade in his smartest gear!

Distance is no object to Charles Bamforth. From his home in California, he has zeroed in on a man who played the briefest of first-team roles at the troubled Wolves of the mid-1980s. But playing was only the start of his story…..

To this day, Wolves may not realise it but Joe Jackson was twice a youngster on their books. Second time around, he succeeded in making the senior side – just- but surely this devout Christian has gone on to even more impressive, admirable and courageous contributions to his proud home city.

Born in April, 1966, Joe represented Valley Park School and Wolverhampton Boys and was a Molineux schoolboy from the age of 13 or 14. John Barnwell was in the gaffer’s seat but it was youth coach John Jarman who decided to release the midfielder at 15.

“I went to play for Willenhall and got into the first team in the Southern League the season after they went to the FA Vase final,” he said.

“But I was playing for a side called Astro in a tournament in Wolverhampton when I was spotted by Derek Dougan, who was the guest of honour. I was invited back to Wolves for a trial, although I never told them I had been there before! I was signed as a YTS lad- one of my jobs was to clean Andy Gray’s boots. A good man, Andy.

“There was good camaraderie at Wolves at the time. We had a really good youth set-up, with the likes of Stuart Watkiss, Graham Rodger, Tim Flowers, and Paul Dougherty.

“A little older were Dale Rudge and Ian Cartwright and a bit older still guys such as John Pender and John Humphrey. In the seniors were some really great and helpful people, like Kenny Hibbitt and Willie Carr.

“It was caretaker manager Jim Barron who gave me my chance. I believe Wolves had already got relegated, so Jim promoted several youngsters, including me, at Notts County at the end of 1983-1984.”

Tommy Docherty took over the reins and, from the start, the relationship between manager and player was not rosy.

“I didn’t see eye to eye with him,” he added. “I had a niggly groin injury from the start of the season and it carried on for a while. Things got messy.

“Docherty told me clearly I would not be getting a chance. So when my one-year contract was up, I just decided to knock it on the head. Mansfield wanted me but, to be honest, I had lost my appetite. A lot of my friends were at Bilston Town, so I joined them in 1985.”

The Steelmen were promoted at the end of the season to the Southern League as West Midlands League runners-up. Next stop was another side in the Midland Division of the Southern League, Hednesford, before an August, 1987 transfer to Gresley back in the WML.

After ten goals in 44 appearances in the East Midlands, it was on to Worcester in June of the following year. He was still only 22.

In 1989-90, he was voted their player of the year in the Beazer (Southern) League premier division. Joe was getting back his love for football. That caught the attention of Vauxhall Conference side Yeovil and a £15,000 fee took him to The Huish in August, 1990.

“I was there less than a season. To be honest, I wanted to get back to being close to my family. The club agreed to release me but wanted to recoup their money and no club in the West Midlands could afford it.

“So, while I did come back to living in Wolverhampton, the club I signed for was Dover (fee: £10,000). I went down for games but trained with Walsall, thanks to the generosity of Kenny Hibbitt. Although I hated all the commuting, that was the most successful time of my career in terms of silverware.”

Promotion to the Conference having been achieved in 1993, Joe signed once more for Worcester, as well as taking up a role as football development officer with Bilston Community College.

“I did my coaching badges. The College was linked to Bilston Town, so I was looking after the Bilston youth team as well as the college youngsters.

“Bilston effectively bought my contract from Worcester. In due course, I became player-manager. It was a great experience.

“We finished sixth, eighth and third in the Doc Marten’s Midland Division. In that third season, we missed out on goal difference.

“Then I joined Stourbridge in the Midland Football Alliance as manager in November, 2001 and we won league and cups back to back but could not get promoted because of the standard of the ground.

“I took a break for a year or so, before a short but disappointing spell with Bromsgrove, after which I decided to knock it on the head.

“All this time, I was still with the college, by now called City of Wolverhampton College, and became football coordinator until redundancy last year.

“There was major emphasis (and £3-4m facilities investment) on football in the community, with liaison with the police and the County FA and others.

“However, since 1998, I have also had my own organisation, NPV Football Development, which allows me to use my passion for helping disadvantaged and sometimes troubled youths from tough areas to adopt football as a positive tool for prevention and intervention.” 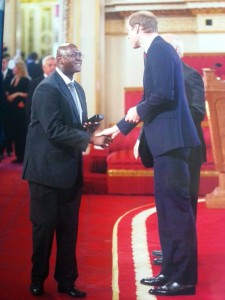 The proudest of days…..being congratulated by Prince William.

Surely, here is an application for the noble game more crucial than any Premier League fixture. Talking to Joe Jackson helps restore one’s faith in the power of the sport as a force for good.

Gladly, others have recognised his devotion. He received a long service award from the FA in 2013 – one of 150 people nationally who received this recognition that marked the 150-year anniversary of the FA. Joe was presented with the honour at Buckingham Palace by HRH Prince William.