Wee Willie And His Surprise Heroics

A Carr Crash Of A Night For Albion 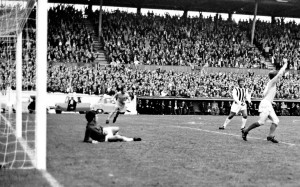 Willie Carr celebrates one of his three goals for Coventry against Albion in 1969.

As if Willie Carr’s 289 games for Wolves didn’t make him enough of a favourite in these parts, how about the feat he achieved more than five years before even arriving at Molineux?

It wasn’t only all that sterling service in gold and black that enamoured him to supporters. He also previously stung Albion by scoring a hat-trick with a difference.

No-one would have been surprised if Ernie Hunt or Bobby Gould – both previously or later of Wolves – had performed such heroics in the sky blue of Coventry.

But the flame-haired Carr was five months short of his 20th birthday and recognised as a midfielder when he popped up no fewer than three times to deadly effect in Albion’s 3-1 defeat at Highfield Road on August 12, 1969.

It makes the Scot one of the youngest players ever to score three goals in a game for Coventry and he maintained the happy knack throughout his career.

His 26 Wolves goals included one on his debut in a sensational 7-1 Molineux rout of Chelsea in March, 1975, and also the last-gasp equaliser from a penalty in the FA Cup semi-final against Tottenham at Hillsborough in 1981.

“I only ever scored one hat-trick and have some fun talking about it to Albion fans,” Carr said this afternoon.

“If I remember right, the manager, Noel Cantwell, pushed me up that night to play alongside Neil Martin and he had a lot of joy with winning high balls.

“I kept latching on to the knock-downs and think all three goals were from inside the six-yard box. I actually should have scored four but put a good chance wide near the end.”

Just over a year later, nobody who saw it will forget the famous Hunt volley for Coventry against League champions Everton that Carr instigated with his ‘donkey-kick’ set-piece.

Albion’s side at Highfield Road during that first midweek of the 1969-70 season contained Danny Hegan (newly signed from Ipswich) but there was another oddity about their line-up; namely, that Gordon Nisbet played his only first-team match as a goalkeeper before embarking on an outfield career that brought him hundreds of appearances, mainly as a full-back. 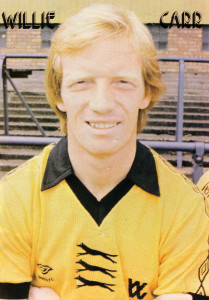 Carr, happily, has been to a couple of games at Molineux this season, having retired to become a ‘professional babysitter’ around the time of his 65th birthday early last January.

And lest we should ever forget that he is a Glaswegian with six Scottish caps, it might be worth pointing out that his full name is William McIanny Carr.

He played more than 250 times for Coventry before moving across the West Midlands for only £80,000.