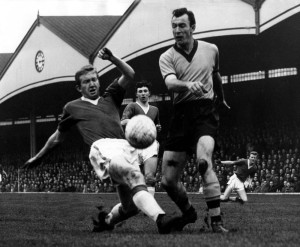 Eddie Clamp makes progress towards Everton’s goal in the 1961 meeting at Molineux.

When The Toffees Came Unstuck

From time to time on these pages, we like to look back at this day or week in history and see what Wolves were getting up to in past years.

And the name of Everton appears to figure prominently among the anniversaries with the Merseysiders beaten 4-1 in 1961 and 3-1 in 1978 on this very date.

The latter success was something of a surprise as Sammy Chung’s Wolves were struggling at the lower end of the First Division at the time in their first season back up and their opponents were second in the table behind Nottingham Forest.

But goals by Kenny Hibbitt (2) and Steve Daley saw Wolves home against a side containing Dave Jones on a Saturday afternoon which saw snow falling.

The scoreline was even more emphatic 17 years earlier. In their first game since a cold snap that had included the end of their reign as FA Cup holders thanks to a third-round replay defeat at Huddersfield, Stan Cullis’s men ran out 4-1 victors, with Jimmy Murray (2), Norman Deeley and Ted Farmer netting.

On the other side of the coin, Wolves were pipped 5-4 at Preston in a Second Division clash on this day in 1928, with their next League game bringing them a 7-0 thumping at Fulham.

Just pushing the boundaries a little, we learn that it was 50 years ago yesterday that the sadly cursed Ted Farmer finally admitted defeat in his long fitness battle. His retirement was announced, coincidentally, on Derek Dougan’s 28th birthday.

This was also the week in decades past that Wolves twice took an important (almost) final step to Wembley in the League Cup.

A John Richards goal meant they drew 1-1 at Norwich on January 23, 1974, in the semi-final first leg while Peter Daniel’s goal kept Swindon’s first-leg lead over them to 2-1 at the last-four stage on January 22, 1980. 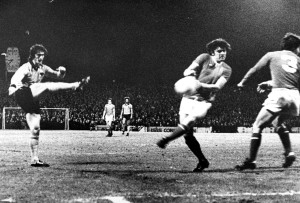 A milestone that few of us will wish to savour comes tomorrow, when it will be 30 years to the night since Molineux attracted its smallest ever crowd for a competitive first-team game.

Wolves’ Freight Rover Trophy meeting with Torquay in 1986 set this ‘low’, with only 1,618 dotted around a lop-sided stadium for a 1-1 draw that featured an Ian Cartwright equaliser.