Packed Church For The Final Journey 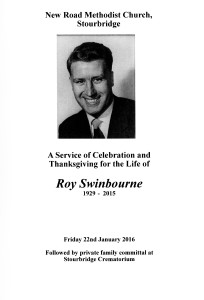 “He wasn’t a Drogba, nor a Vardy…..he relied much more on his skill than those two…..”

Ted Farmer, one of seven former Wolves players at yesterday’s funeral of Roy Swinbourne at Stourbridge’s New Road Methodist Church, was striving to come up with a fitting likeness to a man who became a Molineux hero to him.

John Richards? “Yes, good choice,” he added. “Roy wasn’t particularly physical – there were players like Bill Shorthouse in the team who could do some kicking if it was needed.

“And, like John, Roy was clever enough to keep out of trouble against rough-house centre-halves. He didn’t play much with his back to goal because Stan Cullis didn’t allow his no 9s to come back anywhere near the half-way line. But his distribution was excellent and he was a wonderful finisher.”

Swinbourne played the starring role on the celebrated night Wolves turned round a hopeless-looking situation and brought down the might of Honved just over 61 years ago. A young Farmer was in the packed 54,998 crowd.

“It was that game that turned me from being a Villa fan to a Wolves fan,” he said. “It was well before I signed at Molineux. I was only 12 and had barely even started playing football.

“My first hero was Trevor Ford of the Villa – now, he was the barnstorming sort I became! But Roy instantly became a big favourite. 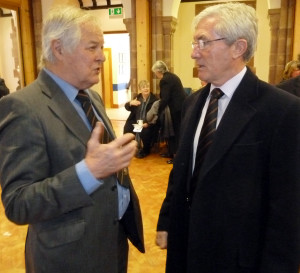 ‘He was quite a lot like you’…..Ted Farmer with John Richards yesterday.

“I was on the North Bank that night against Honved and, although all five goals were scored at the far end, it all left a massive impression on me. That game and occasion changed my allegiances and Roy Swinbourne had much to do with that.”

We have said it before but one of the extra sadnesses these days of attending a funeral of one of the 1950s greats is that there are so few of their team-mates left.

We only really had Roy’s fellow former Wath Wanderer, Ron Flowers, to look out for and he had a hospital appointment yesterday. Bill Slater, the other main-line survivor of the team who won the 1953-54 League Championship, is a frail 88-year-old and living in London.

What was nice, though, was to appreciate a families network. Jimmy Mullen’s son Peter and daughter Margaret were present, the latter with husband Paul. Dennis Wilshaw’s daughter, Diane, also attended, the Wilshaws and Swinbournes having stayed close into much more recent decades.

Mel Eves, John McAlle, Derek Parkin, Gerry Taylor and Richards were there as a good representation from the club’s most successful era since the Cullis glory years and Farmer was accompanied by his good friend, John Harris, briefly a promising young Wolves full-back until injury misfortune preceded his step down to Walsall.

From the present-day Wolves, Graham Hughes, John Hendley, director John Gough and Baroness Rachael Heyhoe Flint were in a gathering swelled almost to ‘full house’ status by the fact Roy was head steward for many years at the church and also a member of Stourbridge Golf Club as well as various Round Table and Rotary groups. From the Former Players Association came Peter Creed and Richard Green and we were even accompanied by former West Indies opening batsman Ron Headley. This was a big turn-out for a lovely man.

His good friend, Bob Fearn, referred in his reflections to the fact Swinbourne had been easily the youngest of five brothers and had helped shoe the pit ponies when his first job after leaving school at 14 in the Yorkshire mining village of Denaby took him into a blacksmith business.

Several years on from signing for Wolves at 16 and doing his national service, he met Betty, his wife of 61 years, at a Saturday night dance at the Civic Hall. She wasn’t particularly a football fan but, having eventually been told of his occupation, remarked: “Oh, you are the one who has been scoring all the goals.”

If there was any consolation in having to quit football in his prime through chronic knee trouble, it was that he had plenty of time to make a success of his life elsewhere. Roy, described as ‘quite a bright pupil,’ certainly did that.

He became a sales rep for Goodyear and then formed his own company, Roy Swinbourne Tyres Limited. John Gough recalled daily sandwich breaks together at lunchtime when they had neighbouring premises in Bilston.

Having been an excellent cricketer for Fordhouses, got his handicap down to three and dabbled in football refereeing, he retired in his 50s when he sold his successful business and had a delightful house in Kinver that I was lucky to visit twice around a decade ago; not bad for someone Bob Fearn said was ‘quite reserved by nature.’

The last three years or so were spent in a nursing home in Kidderminster, with Betty virtually a daily visitor. But phrases like ‘a true gentleman’ and ‘couldn’t have had a better life’ were voiced in church. 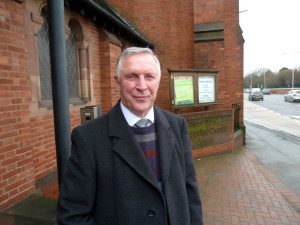 Gerry Taylor, a Wath Wanderer a decade and a half or so after Roy Swinbourne, outside church.

Either side of a poem by Jayne, one of the Swinbournes’ two daughters, there were prayers, bible readings and words of comfort from Charles Ashbrook, who wore a Wolves scarf at the start and finish of the service.

“I have known him for well over 60 years and, before entering the ministry, I sold cars, including one to Roy,” he said. “But that was without making any money on it. Within two minutes of meeting him, I was on his side.”

* We plan to post more memories on Wednesday of Roy, whose body was taken from the church for a private family committal at Stourbridge Crematorium.