A Class Act On Camera, Too 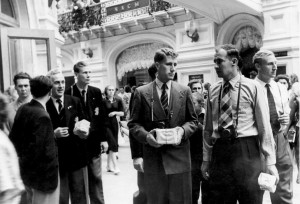 A smartly attired Roy Swinbourne (centre) is flanked by his good friend Dennis Wilshaw on Wolves’ trip to Moscow in 1955.

Roy Swinbourne’s funeral last Friday inspired us to delve into the archives and further remind ourselves what a delightful man he was as well as a top, top player.

Around a decade ago, I had the pleasure of editing and compiling the Official History of Wolves dvd and naturally included the former centre-forward in a memorable day’s filming at Molineux that also contained lengthy sit-down chats on camera with Jimmy Dunn, Bert Williams, Eddie Stuart, Malcolm Finlayson – all also now sadly passed on – Ron Flowers and Bill Slater.

I re-watched the relevant parts this morning and there was Roy, smart in shirt and tie, hair immaculate and looking every inch the class act he was.

As a relative newcomer to all this gold and black nostalgia, I had previously almost had to draw out of him the fact he had not only played against Honved but, as it happens, knocked in the last couple of goals in the club’s most famous ever victory!

He understated his contribution to everything so delightfully; look again at this dvd and observe his modesty when describing the last-day win at home to Tottenham in the epic 1953-54 First Division title race.

“It was always pretty tight as to who was going to win it….Wolves or Albion,” he said. “I was lucky enough to score the winning goal (sic).

“We had never won it before. Did we win 2-0? Yes, I got two goals in that game and we won the championship.”

Swinbourne missed only two Division One games during that memorable campaign and followed up with 16 League and Cup goals 12 months later, plus various floodlit heroics, before injury dealt a cruel hand.

He never made it to Wembley but probably should have done at the end of a 1950-51 FA Cup run to which he contributed two goals and a crucially disallowed one.

The dvd contained footage of the semi-final meeting with Newcastle at Hillsborough – a game watched by almost 63,000 and containing a hard-luck story for the 1949 twin towers victors.

“I scored a goal which should have stood,” he said. “Billy Wright played it in and I took it on my chest and hit it on the volley. It flew into the Newcastle net. 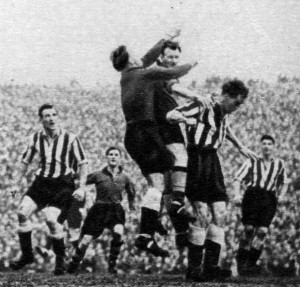 “But the referee gave Johnny Walker, who was way out on the right, offside. He could not have been interfering with play at all. The goal was ruled out, otherwise we would have won 1-0.”

* We also quote an anecdote from the 2005 Thomas Publications title, Wolves, The Glory Years: Roy Swinbourne was still a fresh-faced youngster when he missed the coach departing to Birmingham New Street for the game at Middlesbrough on April 11, 1951. In a panic, he jumped in a taxi and caught the club vehicle up on the Birmingham New Road. “We flagged the coach down and I had to walk past Stan and the directors, who always sat at the front, to take my usual seat near the back,” he said. “They didn’t say a word but the players made sure I knew I was in trouble.” The fact Swinbourne scored both goals in a 2-1 win at Ayresome Park – to take his season’s tally to 21 – might explain why he escaped a fine.