Out Of Africa ……Some Surprise Wolves Interest 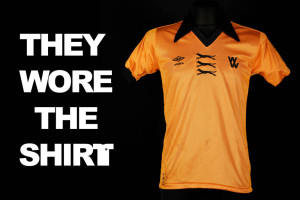 A bit of advance publicity for an eagerly-anticipated publication.

Tuesday, January 5: Was surprised to receive an early-morning call from Africa asking me to explore the possibility of some interview work with current Wolves players over the coming weeks. And the lads themselves were impressed to hear that Forbes Africa – a highly respected publisher of magazines in that part of the world – were interested in their fortunes.

Friday, January 8: Relished, as ever, the banter among former team-mates as John Richards, Steve Daley, Mel Eves and Phil Parkes followed Jody Craddock and Steve Bull in attending a marathon photo shot for the excellent new book being planned by Steve Plant for this coming autumn. All profits from ‘They Wore The Shirt’ are going to Birmingham Children’s Hospital, so the players were happy to give their time in the Game Zone in Molineux’s magnificent museum. And the best of the one-liners? From Daley, we had: “Here comes Roy Cropper” as one of his long-time pals entered the room. And Richards chipped in after picking up one of the more garish goalkeeper jerseys: “Hey, Lofty, you would have looked great at the Lafayette in this!”

Sunday, January 10: Was impressed with Iwan Roberts’ Match of the Day debut tonight. Ok, it was the Sunday night version during FA Cup third-round weekend but he summarised well in the commentary box at Oxford’s giant-killing of Swansea, even if his patriotism probably had him hoping for a win by the Premier League side.

Tuesday, January 12: It was at the mid-January midweek visit of Fulham last year that we first came to terms with the death of Sir Jack Hayward. Before the Championship meeting of the clubs at Molineux tonight, a first-anniversary minute’s applause was held for him at the same time as the life and career of Roy Swinbourne, the legendary 1950s centre-forward, was similarly celebrated following his passing-away over Christmas.

Friday, January 15: Belatedly saw a preview in the Daily Mail of last weekend’s Hartlepool v Derby FA Cup clash and spotted a photo claiming to be of a Colin Boulton save during Wolves’ fourth-round visit to a mudbath of a Baseball Ground pitch in January, 1971. The picture did, in fact, capture the immediate prelude to John Richards’ first goal in the comptition – scored as a substitute in a 2-1 defeat. 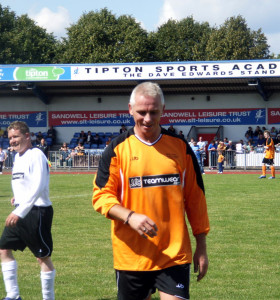 David Kelly in a charity match in recent years.

Monday, January 18: Was disappointed to hear that David Kelly had lost his job in the same ‘cull’ that brought about the sacking of Mark Robins as Scunthorpe boss. No doubt Steve Froggatt will have been on the phone to his good mate ‘Ned’ to commiserate.

Wednesday, January 20: Have been delighted to help 1960s Molineux reserve Brian Thompson – tracked down in Australia and interviewed for this site by Charles Bamforth in mid-December – re-connect with various old friends. Even if, that is, one of them did enjoy ribbing him over the fact he used to live in a road called Albion Street!

Monday, January 25: Three days on from attending Roy Swinbourne’s funeral, was mightily impressed to learn that one-time Wolves full-back Bob McNab had flown over from Mexico to attend the recent funeral of his former Arsenal coach, the Wolverhampton-born Don Howe.