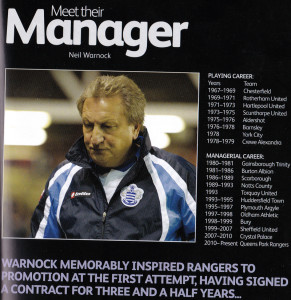 Neil Warnock, as featured in Wolves’ programme for the visit of QPR in August, 2011 – six months before he was interviewed by Steve Morgan and Jez Moxey.

We don’t often home in on stories from the recent past but considered this one to be worth posting, coming as it does straight from the horse’s mouth.

Neil Warnock wouldn’t have been every Wolves fan’s choice as manager, so how close was he to being appointed following the sacking of Mick McCarthy early in February, 2012, during the last of the club’s three successive seasons in the Premier League?

The abrasive Yorkshireman had left QPR for the first time the previous month and was not long past his 63rd birthday when he appeared on the Molineux radar.

We all know Steve Bruce and Alan Curbishley were strong candidates as the club pondered how best to try to preserve their top-flight status, so here is what Warnock wrote in his 2014 autobiography, The Gaffer, about his flirtation with Wolves.

“Within a month, I was weighing up three strong possibilities – Wolves, Leeds and Huddersfield, who were all without a manager,” he wrote.

“Wolves were obviously tempting because they were Premier League and were a club with a rich history and magnificent stadium. They were in trouble but not adrift and I thought I could keep them up.

“I spoke to Jez Moxey and agreed to meet him at the house of Steve Morgan, near Chester. As I was waiting outside, the phone went. It was Ken Bates, Leeds’ chairman.

“He said: ‘Neil, I want you to be our next manager. Come over to Monaco and agree terms’.”

Warnock reportedly declined to turn his car round there and then, despite the insistence that Leeds ‘are a bigger club’ and the job was his if he wanted it, with no interview necessary. All he had to do was board a plane to Monte Carlo, have a glass of wine and talk money.

He kept his promise to Morgan and Moxey, though, and went ahead with his Wolves interview while telling Bates he would demand a quick answer from those in power at Molineux in order not to close the door on Leeds if they proved the keener.

“I spent three hours with Steve and Jez and we got on well,” he added. “We talked about everything.

“Steve asked me what I thought about Wolves. I said: ‘You have got one of the worst back fours in the League. If I’m coming, I will need to be in by Monday to work on them for a week. But you have enough in midfield and up front to score goals.’

“I asked Wolves for a decision inside 24 hours as I didn’t want to end up missing out on both jobs through waiting for them.

“The next day, Steve Morgan rang. ‘Neil, we liked what you said but we are still in the process of interviewing and I know you said you needed a quick decision.’ I said: ‘Steve, if, after three hours, you don’t know if I’m the right one, then I’m not the right one. I think you are making a mistake but it’s your club and your decision and I wish you well.’

“I liked Steve and Jez and would have loved the chance to keep Wolves up but it was not to be. They gave it to Terry Connor, which wasn’t what they were originally looking for, so that did make me wonder whether I would have got the job if I had been prepared to wait.”

Warnock was pictured in Monte Carlo with Bates a few days later and was soon announced as the manager of Leeds – the club his son supported. He admitted Elland Road had a certain pull as he was originally from Sheffield.

Despite being retained after a change of owners, he still stayed at Leeds for less than 14 months and left with them five points off the Championship relegation places.