Stowell And Leicester…….Could It Really Happen? 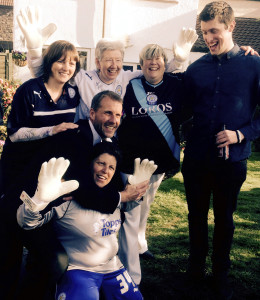 Their 1-0 home defeat against Crystal Palace on February 7 left them bottom of the table, two points behind QPR and three adrift of 18th-placed Burnley.

It wasn’t just that parlous placing, though, that left them looking so vulnerable. Adding to the gloom over the King Power Stadium was the fact that five of their next six matches were away – against Arsenal, Aston Villa, Everton, Tottenham and Manchester City, no less.

That quintet of trips yielded a grand total of one point and even the home clash with Hull in between was only drawn, leaving the Foxes – then under the management of Nigel Pearson – seven points beneath the safety line and hotly tipped to go straight back down.

We now know, of course, that they finished 2014-15 sensationally with seven wins and a draw in just over a month and a half and have this season sent even greater shockwaves through the game to lead the way by a full five points.

Mike Stowell has become one of the club’s longest-serving employees, living through relegation to League One for the first time in their history (under Ian Hollway in 2007-08), two promotions and three spells as caretaker (joint) manager.

He is now plain old goalkeeper coach and first-team coach – and relishing life in the East Midlands. Avert your gaze from Claudio Ranieri’s beaming smile when the cameras home in as win follows win and he is often there in the background, with Craig Shakespeare.

Stowell won nothing in well over 11 years at Wolves, save for his seven-game cameo towards the end of the 1988-89 Third Division title-winning campaign.

Now he could become a Premier League winner, with the consolation of ‘just’ a Champions League place if the Foxes should fall away and have to settle for a top-four finish.

Little sentiment though there is in football, I would doubt whether there’s a former Wolves team-mate around who will not be wishing him everything he wishes for himself.

From Paul Simpson at Newcastle through to Paul Cook at Portsmouth and Keith Curle at Carlisle, taking in any number of other dug-out prowlers like Dougie Freedman (Nottingham Forest), Darren Ferguson (Doncaster), Rob Kelly (Blackburn), Mark Venus (Coventry), Kevin Keen (Colchester) and even the overseas-based Kevin Muscat, Neil Emblen and Carl Robinson, the feeling will probably be the same: Get it won!

The keeper was a highly popular figure at Molineux and always brings affectionate comment from Sky Sports’ Matt Murray as the man who guided him through his first few steps in the professional game.

We deliberately haven’t tried to chase Mike for comments for this piece. However Leicester are coping with life at the top, they are doing it just wonderfully as Saturday’s eye-opening demolition of Manchester City showed.

This is brewing up to be the story of the century in English football. We wish him well in helping see through what would be a sensational achievement by the underdog in the cash-cow world of the Premier League.

The young Stowell….would he ever have dared dream of becoming a Premier League title winner?

Are they really likely to be fearful now of going to Arsenal this coming weekend? Even if they should stumble there, they still have Norwich and Albion to come in their following two fixtures, both at the King Power Stadium.

It is utterly astounding. Ranieri, Stowell and co are staying cool……but how is Gary Lineker going to contain his excitement?