New Posting For Dean Of Torquay

The Lure Of Wolverhampton 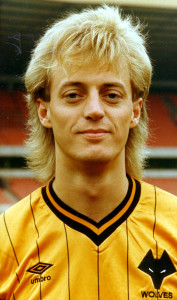 Dean Edwards around 30 years ago.

Dean Edwards is back in Wolverhampton pursuing his football career – and admits he is attracted by the thought of moving home permanently.

The mid-1980s Molineux striker is spending a few days in the city of his birth and attended a Wolves home game yesterday for the first time in about six years.

Now a new business venture has him wondering whether he would be better off being based in the West Midlands rather than in his desirable adopted home area of Devon’s holiday coast.

“I left my job at Torquay United at the end of September and in November set up a business called The Orange Wolf Company which basically makes me a registered players’ agent,” he said today.

“I put together a consortium who went in at Torquay last May and had a spell as director of football but the club are having a really tough time at the bottom of the National Conference and I have been getting slaughtered!

“One of the problems is that they don’t own their ground and there are no assets. Also, the weather has meant they have had some home matches postponed.

“I have recently got three lads out to Sweden and am going to see an academy game at Crewe tomorrow and speak to Notts County’s head of recruitment, Guy Branston.

“I have also been working on getting a talented Estonian international into a club in England and keeping an eye on Scandinavia, where the season starts in a few weeks.

“What I am noticing is that the Midlands is so much better as a base for this type of work as I could reach about ten clubs within an hour. Apart from Exeter and Plymouth, the nearest club to me down in Torquay is Bristol City.

“My kids have grown up now and are doing their own thing but my wife loves it down there – we both do – and doesn’t want to leave. It is a lovely place to live but it’s a retirement town really.”

Edwards scored ten goals in 34 first-team games for Wolves and then broke Molineux hearts by netting in both legs of the Sherpa Van Trophy area final in the spring of 1989 as Cyril Knowles’ unfancied Gulls knocked out the holders from a division higher.

He followed up by scoring in the final defeat against Bolton at Wembley and was also on target at the twin towers when Torquay beat Blackpool two years later in the bottom division play-off final.

“I scored in three semi-finals and two finals for Torquay and have helped keep the chains off their doors during a very difficult financial time, so I feel I have done some good things for them as well.

“It was Colin Lee who asked me to go down there as commercial manager. A football guy from up in the Midlands called Terry Brumpton had done the job before and put a good word in for me as I knew him from working together at Hednesford Town.

“Colin was the chief executive and just wanted me to go out meeting fans and business people and bring some sponsorship deals in. I did that job for five and a half years.

“As a manager, I enjoyed doing the deals more than the coaching – that’s why I took Matt Elliott in at Hednesford to work with the players.

“I see my future being off the pitch but that M5 gets longer and longer. There is some thinking to be done.”