Wolves In The Youth Cup – A National Story 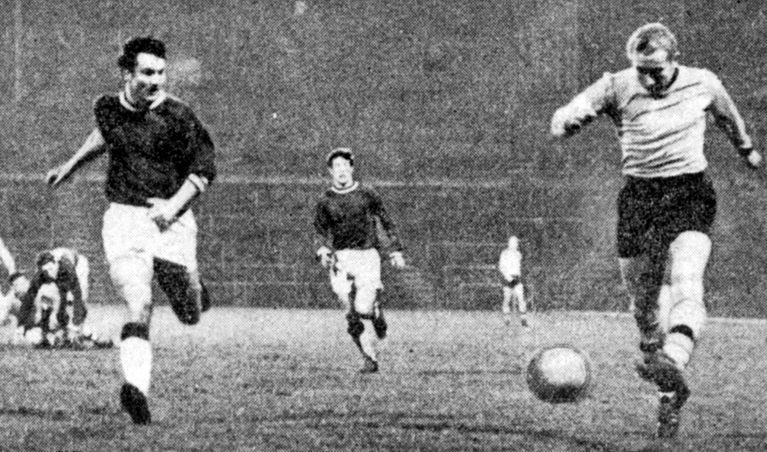 Dave Clements scores one of his four goals in Wolves’ 6-1 FA Youth Cup slaughter of Birmingham in 1964.

So where did you turn to for news of Wolves matches in this season’s FA Youth Cup?

If you didn’t look at the club’s own media outlets or in the Express & Star, it’s a fair bet you remained uninformed of the victories over MK Dons and Met Police and the subsequent exit at home to Reading.

There was a time, though, when Wolves matches in this competition made considerable headlines well beyond this region – and not just in the years when they excelled in it.

They had beaten only Thorneywood and Aston Villa in the 1963-64 staging when Birmingham came to Molineux one night early in the New Year. But that didn’t stop the press box from being a busy place.

All the national newspapers carried sizeable reports on Wolves’ 6-1 fourth-round triumph and one writer, Cyril Chapman, wrote 13 paragraphs on a game in which Dave Clements scored four times and David Carrick and Gordon Roberts once each.

Clements didn’t make Wolves’ first team but went on to play extensively for Coventry, Sheffield Wednesday and Everton and followed up his 48 Northern Ireland caps by managing the country.

Interest in the Youth Cup, at a time when Wolves’ first team were on their way to a mediocre final placing of 16th, was also underlined by the attendance – a more than respectable 3,684.

The spotlight was even greater in the next round, the quarter-final, as the draw took the Wolf cubs to Old Trafford on March 11 to face the side the club had lost to in the first two finals, 1953 and 1954.

Manchester United, in fact, won the tournament in 1954-55, 1955-56 and 1956-57 as well and had their grip on the silverware broken at the sixth attempt by Wolves’ astounding comeback success against Chelsea in 1958.

In 1964, United had Jimmy Rimmer, John Fitzpatrick, Willie Anderson, David Sadler and John Aston in their side but fell behind to a Paddy Buckley goal in the 13th minute.

Sadler, like Aston a European Cup final winner four years later, struck twice mid-way through the second half before Graham Hawkins raised Wolves’ hopes of forcing at least a replay by equalising with a tremendous 79th minute shot.

Plenty of goals, plenty to read…..

There were only five minutes left when Aston pushed home Anderson’s low cross for the winner, United building on this 3-2 win by going on to lift the trophy again thanks to a 5-2 conquest of Swindon in the two-legged final.

It was a match that held fond memories for those who saw it and, for those who didn’t, there was that widespread coverage in the local and national press. How times have changed!