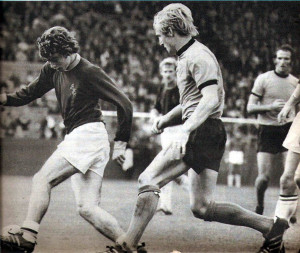 Derek Parkin moves in to tackle Dave Thomas – familiar in having his socks rolled down – in Wolves’ 3-2 win at Burnley in September, 1970.

Steve Kindon’s busy 2016 schedule of public appearances is to include a function in aid of the Guide Dogs For The Blind Association to support his ex-Burnley team-mate Dave Thomas – also a former Wolves winger.

Thomas, 65, has hereditary glaucoma and has been registered blind/partially sighted since 2008, although he can still see well enough to play golf off a handicap of nine.

His deteriorating peripheral vision has resulted in him being allocated a guide dog this winter and he is aiming to raise £15,000 for the association after his father, also named David, went totally blind before his death at 97 the summer before last.

Kindon was a long-time colleague of Thomas’s at Turf Moor in their early years in the game, although their spells in the West Midlands did not overlap.

Now, approaching half a century on, he has shown his compassionate side by turning out alongside a third Burnley favourite, Paul Fletcher, to help the money-raising effort.

“I’m a few weeks younger than Dave and always did my best to stand up on the field for lads like him who didn’t have my physical attributes,” he said.

“We were members of the Burnley team who won the FA Youth Cup in 1968 for the only time in the club’s history (Coventry were beaten over two legs in the final) and also played together for England Youth.

“We have all been saddened to hear about his problems because he was a smashing player at Burnley who went on to have a brilliant career elsewhere, including winning eight caps for England.

“I’m delighted to do what I can to help this cause and will be more than happy to find a space in my diary to be there.”

News of the April 20 function comes soon after we learned Kindon is due to make two appearances in Wolverhampton during the same month, further details of which will be posted soon.

And we have also discovered more in recent weeks of the unique ‘care’ the bustling forward showed to other less physical team-mates.

The autobiography of ex-Burnley, Middlesbrough and Northern Ireland winger Terry Cochrane reveals how he and Tony Morley experienced the Kindon effect when the present-day champion after-dinner speaker returned to Turf Moor in 1977 following his Molineux stay of 167 appearances and 31 goals.

Morley, later to achieve League Championship and European Cup glory with Aston Villa, was once reportedly locked in the toilet by him on the way back from a game at Cardiff – and not released until the coach neared Birmingham!

“My style was to take the mick out of them off the field but to be highly protective of them on it,” Kindon added. “In a way, I mentored young lads like those two. 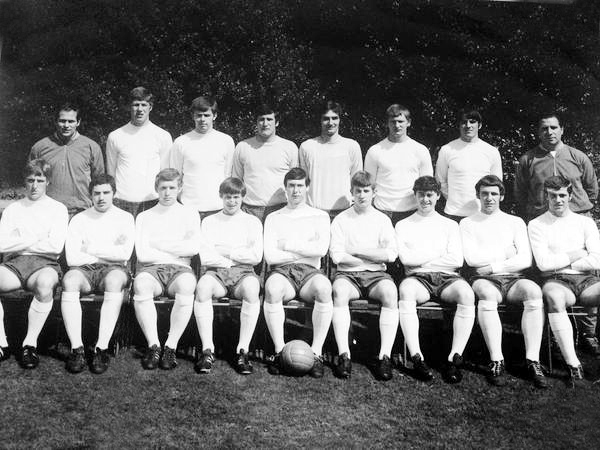 “Terry hadn’t long been over from Northern Ireland when he asked whether I thought it was worth him taking his wife and their young family to see Blackpool Illuminations.

“I thought it was a great idea and was staggered to hear the morning afterwards that he hadn’t rated them very highly. It turned out he had seen the enormous queues of traffic on the south side of the town, towards where we live, and decided to get through while it was quiet. They were on their way home before the lights were even switched on!

“I took over and drove his family myself shortly afterwards, with Terry absent. It took us four hours to get through but we had a great time…..his wife and kids loved it and couldn’t wait to get home and tell him what he had missed.”