Leading From The Front 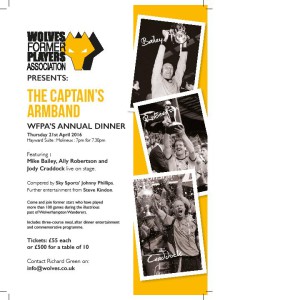 Three good reasons to be at Molineux on April 21.

The event appears to be regaining its familiar ‘annual’ status after a break of several years before the successful relaunch last April.

And Richard Green, whose arrival on the WFPA is providing it with fresh impetus after his excellent work on a number of other Molineux-related causes, has come up with another interesting theme following his choice of a goalkeeper-orientated evening 11 months ago.

This will be a Captain’s Armband night, with Mike Bailey, Ally Robertson and Jody Craddock assembled for the Thursday, April 21 function.

The trio – trophy winners all during their years at the club – will be on stage for a question-and-answer session compered by Sky Sports’ Johnny Phillips.

“We are trying to have a theme for the dinners and think last year’s worked well, with Phil Parkes, Matt Murray and Mike Stowell in such good form in front of a big turn-out,” Richard said.

“Now we have been delighted to receive confirmation from Mike, Ally and Jody that they will go up on stage and give us some memories and new insight from the happy time they spent with Wolves.

“They were all good leaders on the field and very popular guys, with memorable experience of getting their hands on some silverware. The decision was taken a year or two ago to make the association more wide-reaching by opening it up to players who played 100 or more games in the illustrious past of Wolverhampton Wanderers.

“We again invite supporters now to come and join these stars for what should be a great night.”

Tickets cost £55 each or £500 for a table of ten, the price including a three-course meal, after-dinner entertainment also containing a comedy turn from Steve Kindon and a commemorative programme.

The function is 7 for 7.30pm and enquiries should be addressed to Richard Green on info@wolves.co.uk 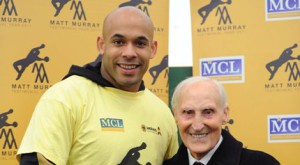 Bailey lifted the League Cup and Texaco Cup as highlights of his 436-game stay at the club, Robertson was skipper when the late 1980s Wolves won the Sherpa Van Trophy and Third and Fourth Division titles and Craddock was Mick McCarthy’s on-field leader when the Championship crown was held aloft at Molineux in 2009.

Robertson and Craddock played 136 and 237 games respectively for the club, all in the centre of defence.

The push in selling tickets continues next week when the dinner is publicised in Wolves’ programme.