Winger Insists Leicester Will Do It 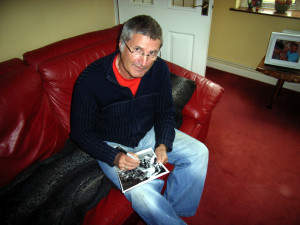 John Farrington at home in Leicestershire.

John Farrington has never set foot in Leicester’s King Power Stadium on a match day and sees no reason to do so over the final two and a bit months of the Premier League season.

But, from his vantage point in ‘Foxes’ country in a village near Hinckley, he has no doubts: Claudio Ranieri’s side will be crowned champions.

We recognise the rivalry there has been in the not-too-distant past between Wolves and the clear top-flight leaders but we hope our readers indulge us in this diversion as we shine a spotlight on the East Midlands and express the widely held belief that it would be wonderful for football if this ultimate underdog conquest could be accomplished.

“Nobody expected ‘little Leicester’ to do what they have done but they are playing the best football in the country, so they deserve everything that has come their way so far,” said the winger, who followed his 38 first-team games for Wolves by playing around 130 times for Leicester.

“There are a lot of excited people over here and everyone is really behind the club. But they are also frightened to say too much!

“My own view is that they will do it. In fact, I’m sure of it. The last week has been a turning point, with the other challengers slipping in midweek games and Leicester getting that great result at Watford.

“Their next match is at home to Newcastle and that looks about as difficult as a visit from Dudley Sports at the moment. I say that with some regret as I am from the north-east and have a thing about Newcastle but it really does look a home banker.”

Farrington’s success as a Leicester player was confined to the more modest winning of the Second Division title in 1970-71 and to an unlikely subsequent Filbert Street victory over Liverpool in the Charity Shield after double winners Arsenal had been unable to play in it because of overseas commitments.

The same year, there was also a run to the FA Cup quarter-final, in which he had a goal against Arsenal disallowed by Jack Taylor. Events in 2015-16 have blown those worthy achievements out of the water but he has no intention of gatecrashing the current party mood in the city.

“I live a few miles out and don’t much care for driving into Leicester,” he added. “The only times I have been to the new stadium are for presentation nights involving our grandkids.

The winger pictured at Arsenal during his Wolves career.

“They play football, so my weekends are taken up with watching them and with watching football on TV. I’ve seen a few of Leicester’s games that way but I didn’t even go when I had a ticket for Newcastle’s game here last season.

“I will watch from my lounge and keep my fingers crossed that they can see it through. Three of my old clubs – Leicester, Cardiff and Northampton – are all doing well and I’d love it if Wolves could get back up the table as well.

“They are the club I supported as a lad, even from the north-east, and I believe they are a bigger club than Leicester. I wish I could have played better for them than I did when I was there in the second half of the 1960s.”