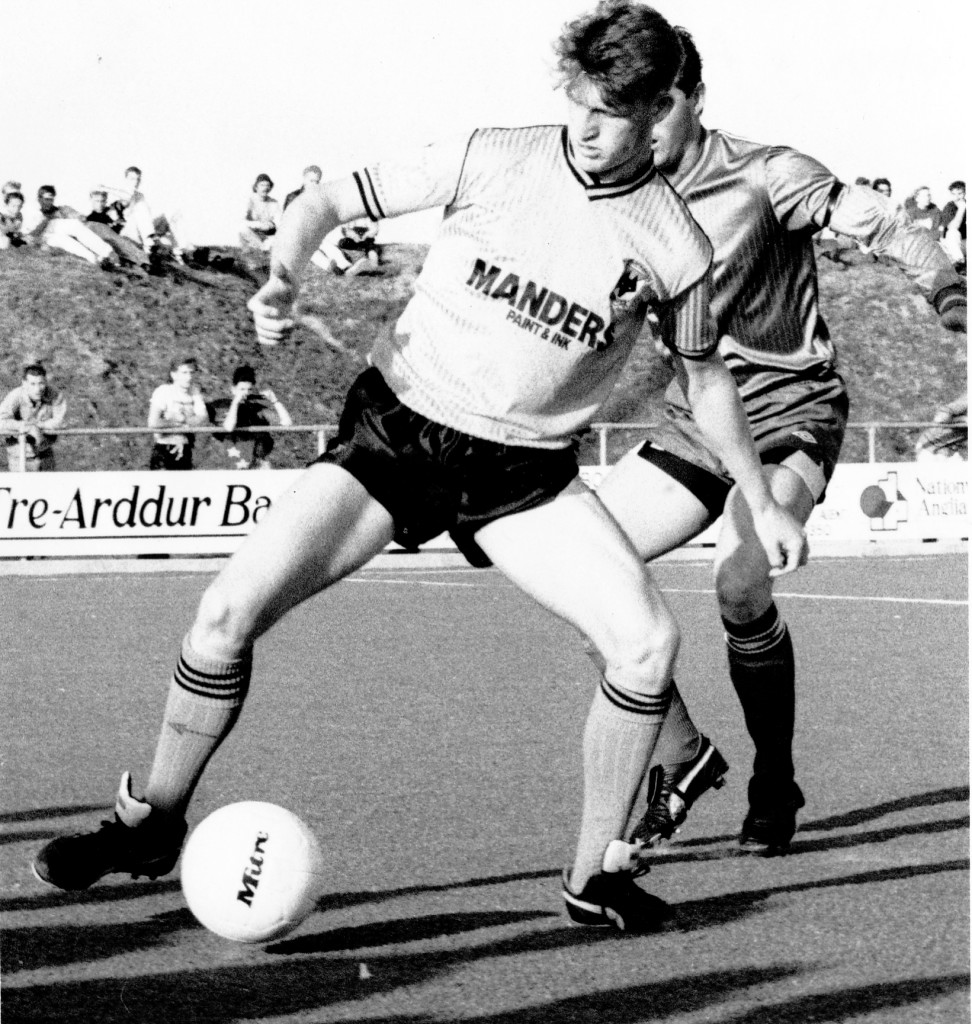 Andy Mutch is challenged by Chris Evans – the long-time youth supremo at Molineux – on Wolves’ pre-season visit to Anglesey in 1989.

In the space of just over two years, Andy Mutch went from playing in front of successive Molineux crowds of fewer than 2,500 to appearing and scoring in front of more than 80,000 at Wembley.

Others, like Jamie Vardy today and Ian Wright, have leapt further but few men in Wolves’ history have climbed so quickly from gloom to glare of the spotlight.

It is 30 years this month since Mutch first donned gold and black after being recruited from Southport and therefore high time for a reminder of how his arrival in the West Midlands came about.

Steve Bull was still a month or so from making his Football League debut – with a substitute’s role on the day Albion’s relegation was confirmed with a mid-April 1-0 defeat on QPR’s controversial plastic pitch.

It’s hard to believe that was the only top-flight appearance Bull was ever to make in his phenomenal career. But the early steps of his long-time partner in Wolves colours are no less surprising in hindsight.

Talking of goal machines, Kim Casey was the magnet for most of the scouts who descended on Aggborough for Kidderminster Harriers’ 6-1 FA Trophy victory on February 18, 1986. And no wonder.

The hat-trick he scored against Southport in what might now be referred to as a ’round of 16′ tie took his goal tally for the season to an astonishing Bull-like 47 but the striker was long on record as saying he was happy playing in non-League football while also holding down a good job outside the game. Which explains why Wolves caretaker manager Sammy Chapman was more concerned that night with observing the performance of the awkward-looking leader of the visitors’ attack.

Mutch didn’t score in a game in which his side’s goal came from Accrington legend John Coleman and ex-Wolves man Mark Buckland was among Kidder’s other marksmen. But he caught Chapman’s eye sufficiently for the Ulsterman to quickly agree a £5,000 fee with the Multipart Northern Premier League club and to arrange a meeting with him at an M6 service station in the same week.

It wasn’t seen as big news. The announcement of Mutch’s signing on February 24 did not even make the back page of the Express & Star. The story was used two pages in from the back and not very prominently.

Mutch had scored more than 20 Southport goals in 1985-86 but there was the possibility of a delay in the attempt to bring some of that much-needed potency to Molineux.

“He has an engineering job and is a very honest lad,” Chapman said. “He didn’t want to just walk out. He is seeing his boss about leaving but if he has to work a week’s notice, he will start training with us next Monday.”

In the event, Mutch secured his release promptly and was pencilled in for a debut in the midweek game at Darlington. That game was frozen off, though, so was the trip to Lincoln the following Saturday.

Wolves had played only one game in a month – and that 1-1 draw with Walsall was on a considerable carpet of Fellows Park snow. The lack of a home fixture since the February 1 defeat against Bolton was impacting on the club’s precarious finances but any thoughts of an improved crowd for the visit of Rotherham five weeks later were soon scuppered.

Despite the bright, spring-like weather, only 2,838 turned up – Wolves’ lowest crowd for a League match since 1892. A 0-0 draw in which Geoff Palmer had a 62nd minute penalty saved by Kelham O’Hanlon was an inauspicious start for the new forward, especially as the Express & Star match report referred to him as David Mutch!

Having had a shot cleared off the line by John Dungworth, the Liverpool-born 22-year-old shook off an injury to face Plymouth at Molineux three nights later, when the attendance for Wolves’ 3-0 defeat dropped to 2,367. For the 1-1 draw at home to Bury another seven nights later, it fell further to 2,205. Depressingly, after each of Mutch’s first three home matches, reports contained mention of there having been the lowest League crowd at the venue since the visit of Accrington on November 19 the small matter of 94 years earlier.

Given that the crowd for the Sherpa Van Trophy final against Burnley in May, 1988, was 80,841, we are talking about a 28-fold increase on the first Molineux attendance Mutch first played in front of.

Had his eventual replacement, David Kelly, (impossibly) helped achieve the same multiplying of crowd figures, Wolves would have been performing to a gate of around 600,000 somewhere round the country early in 1995-96!

Back to reality….Mutch, having also played in a 1-0 win at Doncaster early in his stay in these parts, soon clicked. He scored seven times in the season’s final 12 matches but couldn’t prevent the club from suffering a third successive relegation and dropping into Division Four for the first time.

It wasn’t easy to foresee at the time but happy days were on the horizon. He netted 13 times in the 1986-87 promotion near miss, then hit 23, including his Wembley opener, the season after that, when he and keeper Mark Kendall each played all 61 League and cup games. 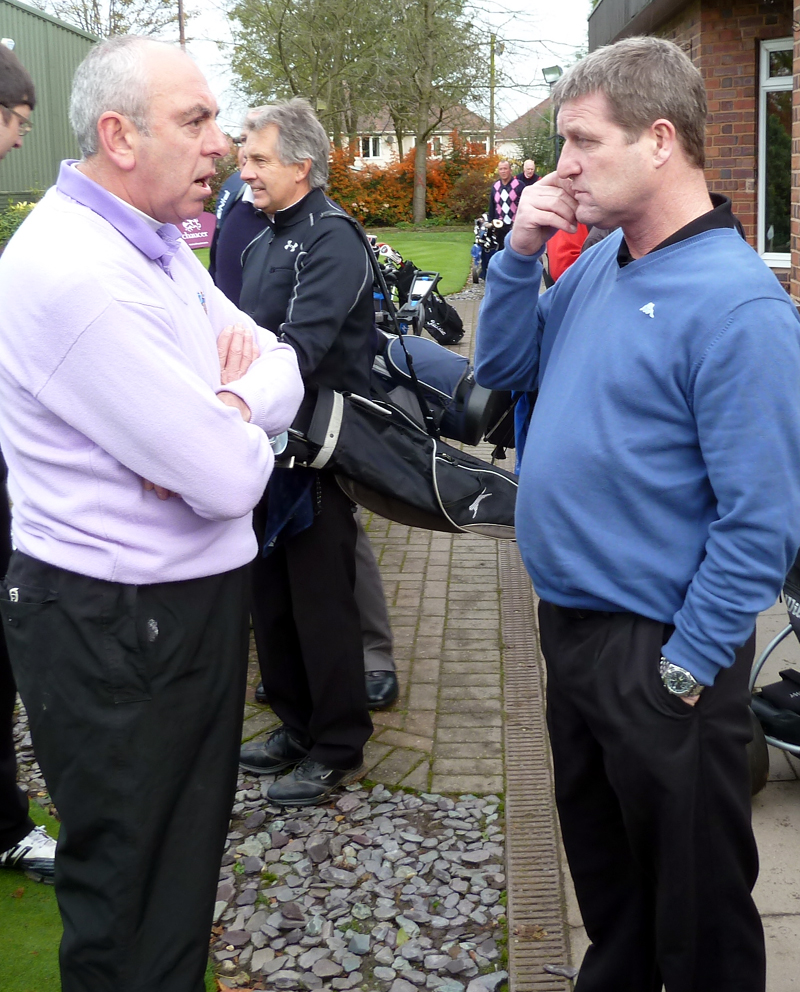 Andy Mutch at a golf day in recent times with Geoff Palmer, a fellow survivor from 1986.

With consecutive promotions as well as an SVT triumph, recognition with England under-21s and England B and, eventually, a move to the Premier League with Swindon, his career was a huge success story.

He is one of only 15 men ever to have scored a hundred or more Wolves goals and he was thrilled to be inducted into the Molineux hall of fame in 2013.

The club can never have put £5,000 to better use – and to think it was provided by their lottery association as there was nothing in the general Molineux coffers!