One Giant Leap Of Faith

How Bully Defied The Odds To Join Up With England

With Euro 2016 on the horizon and an increasing buzz surrounding the England team, we invited guest writer Jason Ezard to cast an eye back more than a quarter of a century and also to add a punter’s spin on his words….. 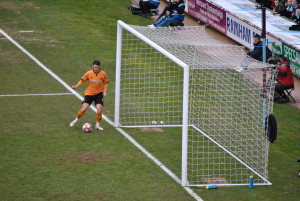 Matt Jarvis touches in a goal for Wolves at Burnley.

Unfortunately for Wolves fans, seeing their club’s badge on numerous flags is as close as they will get for now to having representatives from Molineux with the national team.

A few of Mick McCarthy’s Irish contingent played at Euro 2012 but not since Matt Jarvis in 2011 have Wolves had a player who has pulled on the senior three lions shirt. And you have to go back to Steve Bull in Italia ’90 to find the last Wolves player to play for England at a major tournament.

The legendary centre-forward forced his way into the World Cup squad despite playing outside the top flight; something that seems unthinkable in today’s game even given Jamie Vardy’s rise from non-League football.

Bull featured four times in a tournament in which England were eliminated in the semi-final on penalties against Germany. It was the furthest the country had gone since winning against the same opponents in the 1966 final.

In 2016, we all dream of an ideal world – one where Jamie Vardy will find the net and England win the European Championships. From a football betting and realistic perspective, it looks as though the squad Bully was part of will not be surpassed. That was the biggest stage he appeared on in his short, eventful international career and the only way it could have been bettered is if Bobby Robson’s side had reached the final.

He was obviously a man for the big occasion. His call-up came off the back of netting an incredible 50 goals in 55 games as Wolves were promoted to the Second Division. And his England career began in the same fairytale fashion.

May 27, 1989 is a day that will live long in the memories of Wolves fans of a certain age. Thousands of them made the journey to Hampden Park to get a glimpse of Bully in a senior England shirt after his under-21 recognition and they were rewarded with a scoreline that suited them very nicely: Scotland 0-2 England.

He started on the bench but an injury to John Fashanu saw him on in the 31st minute and, of course, he scored. He had arrived on the international scene doing just what he did best – ruthlessly and aggressively hit the back of the net.

If his debut was good, probably his finest hour in an England shirt came against Czechoslovakia in the countdown to the World Cup.

Combining beautifully with Paul Gascoigne, he scored twice at Wembley as England ran out 4-2 winners and another goal against Tunisia was enough to cement his spot on the plane to Italy in Robson’s squad.

With Gary Lineker picked ahead of Bully in the England side, opportunities mainly presented themselves from the bench and he wouldn’t go on to score again for his country but he still ended up with a very respectable four goals from 13 international appearances. 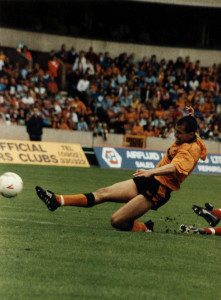 Steve Bull in action in the early 1990s. Photo by Mutchy.

Nowadays, with the way of the modern game, the prospect of England players appearing in a major tournament finals while outside the Premier League seems so remote.

Steve Bull displayed a rare loyalty and connection with the fans. Kortney Hause and Dominic Iorfa are now regulars in the national side’s younger-age teams and Wolves supporters are wondering how long it will be before the club send off another England player to a major tournament.