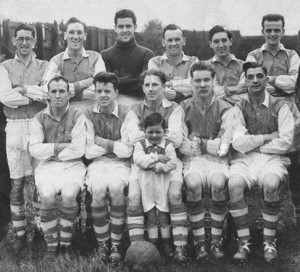 A very young Alan Murray as a mascot for his dad’s team.

Thursday, March 3: Was pleasantly surprised to receive a call from Barry Powell enquiring about the ‘They Wore The Shirts’ book project being overseen and organised by Wolves fanatic Steve Plant. Barry had seen a post on Facebook about the enterprise and was interested to be kept in touch with developments up to publication in the autumn.

Friday, March 5: Was an interested TV viewer as Wolves lost more convincingly at Middlesbrough tonight than the 2-1 scoreline suggests. At the sponsors’ lunch I attended in the Stan Cullis Stand last month, more than one player when interviewed at the microphone by Bill Hatton had expressed the view that he thought Boro would win the title.

Monday, March 7: Spoke to John Farrington and mentioned to him about our meeting with fellow north-easterner Alan Murray, who we featured on here a few weeks ago. John recalled dropping him off at Benton on journeys back home together during their time as Wolves youngsters and was surprised his contemporary had never married. “He always used to fancy my missus!” John laughed. We have recently received a lovely photo from another of their mid-1960s friends, Les Wilson, showing Alan as a mascot for a north-east team at the age of about five, with his dad on the far right of the front row.

Thursday, March 10: Heard from another former Wolves man when Martin Patching rang today to ask when issue four of the Old Gold Glory retro magazine was out. Martin contributes to the pages of Graham Large’s excellent publication.

Sunday, March 13: Was delighted to meet up at Wolves’ televised draw with Birmingham this afternoon with two of my overseas friends – Odin Henrikssen, who put me up for two nights in Norway three years ago, and Alfred Camilleri from Malta. Alfred was here to oversee the presentation of the Malta Wolves Supporters Club’s player of the year trophy. Felt sorry for Odin at witnessing a second 0-0 draw in 24 hours…..he travelled to Norwich to see Manchester City held yesterday in another goalless deadlock.

Tuesday, March 15: Received an interesting email from Wolves supporter Steve Coles in answer to a question we posed more than a month ago. In our caption to the Mike Bailey/Trevor Hockey photo we posted in our Big Picture area, we asked why the two midfielders might have been ‘snapped’ together at Bramall Lane on what appears to have been on a non-match-day. Steve wrote: “Could it possibly have been a long-throw contest? I seem to recall Mike Bailey taking part in one or two about that time but I’m not so sure about Trevor Hockey. This clip featuring Bobby Woodruff in his Palace days gives a brief glimpse of how the competition was run: (https://www.youtube.com/watch?v=yrVsyIODbp0). I might be wide of the mark but it definitely rings a bell or two.” Interesting food for thought. Any more suggestions?

Thursday, March 24: Enjoyed a cuppa with Wayne Clarke at the Wolverhampton city centre coffee shop and restaurant where his daughter Hollie works. I was in Madame Clarke’s (the establishment has long been known by this name!) to introduce fellow journalist Richard Sydenham to Wayne as he had a 1980 League Cup final shirt he wanted signed by he and Willie Carr. Clarke played in three of the early games in the club’s triumphant run in the competition. 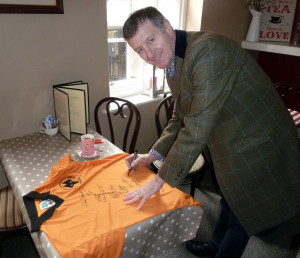 Thursday, March 31: Bumped into historian Pat Quirke in the Molineux main foyer and was reminded that we are now three debuts away from learning the identity of the man who becomes the 1,000th player to appear in League football for Wolves.