The Gift Of Love

A Time For Remembering 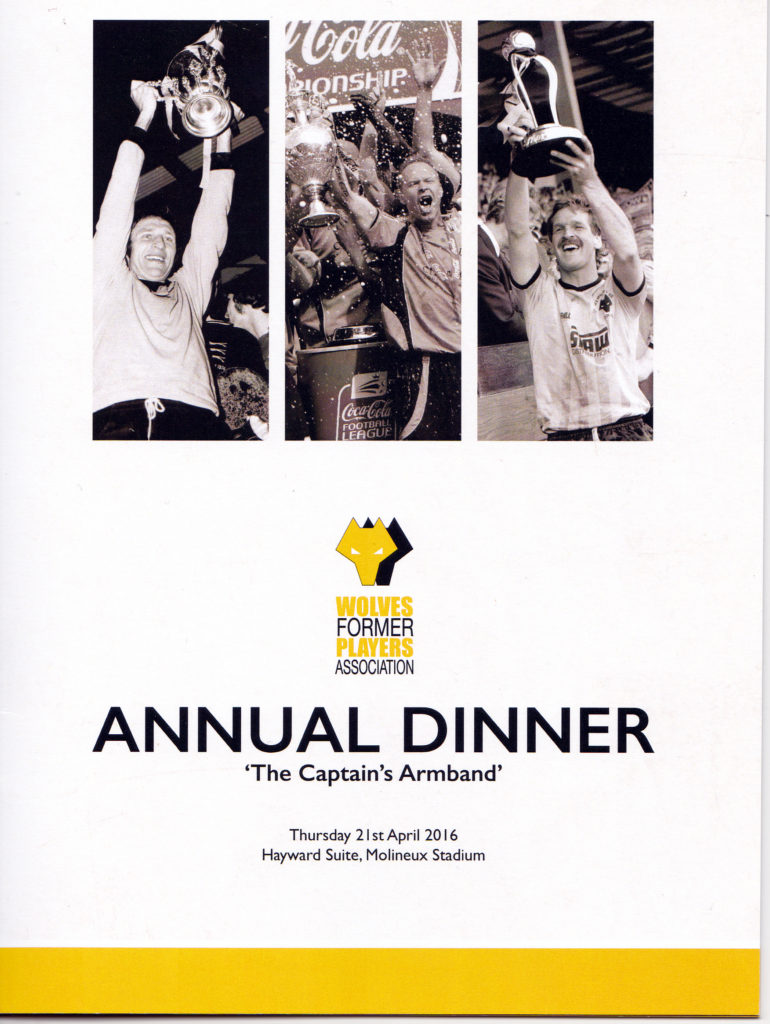 Wolves Former Players Association have used their 2016 dinner to honour the memory of some of their departed friends by making a £2,000 donation to help fund a new reminisce room at the city’s New Cross Hospital.

And with Wolves Aid agreeing to match the amount, a £4,000 presentation was made last night to the Royal Wolverhampton NHS Trust by family representatives of those we have loved and lost such as Barry Stobart, Peter Broadbent, Bert Williams, Roy Swinbourne, Dave Wagstaffe, Bobby Thomson, Alf Crook and Malcolm Finlayson.

The WFPA’s administration manager Richard Green told a capacity audience in Molineux’s Hayward Suite that the facility would be ‘a quiet and reflective place’ next to the dementia ward – one where patients could stimulate their long-term memories with different activities.

And he said there his organisation’s support, which was unanimously agreed by the committee, reflected a wish to put something back into the local community, with plans also in the pipeline for a Molineux Memories project that would involve the Wolves Community Trust and Wolves Museum as well.

With Sky Sports’ Johnny Phillips asking the questions, Bailey referred to the build-up and aftermath to the 1974 League Cup final, commenting on how the elderly residents at the squad’s pre-Wembley hideaway in Worthing had given them a cheerful send-off in return for the kindness the players had shown them during their stay.

“During the game, I felt we were banging too many balls to Derek Dougan and John Richards, so we started playing shorter balls and keeping possession,” he said. “It worked a treat. We played lovely football and they couldn’t get near us.

“To go up and get the cup was the greatest thing in my life and, after dinner at the Hilton Hotel in London, I remember being the last one to go up to bed and there was the League Cup, all on its own, so I took it up to the room with me.

“The next day, when we paraded it at the Civic Centre, somebody left it on the table, so I took it home. Suddenly, I had a call from Bill McGarry saying they couldn’t find the cup. I told him I had it. In fact, our son’s school were absolutely delighted because he had gone to show it off there!”

Robertson revealed that it was his friendship with Brian Little that had tempted him to Molineux in 1986, although he had enjoyed kicking lumps off him in Albion-Villa derbies and also had Newcastle, Luton, Peterborough and various Scottish clubs chasing him as his long Hawthorns career came to an unhappy end at Ron Saunders’s hands.

He was shocked on his first day’s training at Wolves to learn that no kit had been put out for him – he had been expected to take his own. And even after Graham Turner’s arrival in the job, he remained sufficiently alarmed at the club’s slide to once tell the manager he didn’t want to stay.

“I had 18 years at West Brom and my first reaction was: ‘How on earth do I go to Wolves?'” he said. “We’d had great sides at Albion but hadn’t won anything and I came here and we won two titles and the Sherpa Van Trophy. It was absolutely fantastic.

“I didn’t go back to Albion for two years. I was Wolves’ captain and I was 100 per cent Wolves. The whole place was falling down and it was so sad to see that happening to such a big club, with gates down to 2,500. 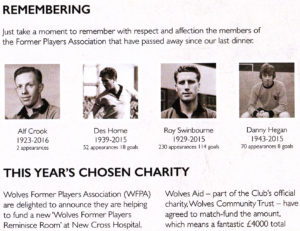 From the inside pages of the menu card…..

“But Graham Turner went to Albion for a kid called Steve Bull and they turned everything round. It was great to be a part of that history.

“My main job was to make sure the dressing room was right. I was 34 and a few of them were in their early 20s……I was like their dad. I had to teach them where and how to drink!

“The whole camaraderie was wonderful and we giggled a lot but when we were preparing for training or a match, I was very serious….it had to be done right.”

Craddock was signed in 2003 after the club reached the Premier League for the first time and said: “It was not the best start to my Wolves career.

“It was simply a case that we weren’t good enough. We got over-run and there was some soul-searching. There was one guy in the crowd who always seemed to have a go at me and then there was that song! I just knuckled down and tried to turn it round.

“Mick McCarthy was the best manager I have had the privilege of playing under. He was with me at Sunderland for three months as well.

“He is really honest and told things as they are. I broke my foot in the first week of the promotion year in 2008-09 but was back around mid-season and stayed in the team then.

“It was great to lift a trophy and there was a great bond…..we went out together, paint-balling and go karting….it was a hard spirit to break.

“I spent six years at Sunderland, we finished seventh in the Premier League twice and I didn’t want to leave. Then I came here to an equally big club and stayed for ten years.”

Craddock was also questioned about the less successful Glenn Hoddle era at Molineux, especially how it ended.

“The players all tried to smash him when he joined in training on a Friday but we couldn’t get near him,” he added. “It was strange when he left…..we all turned up for pre-season training and Stuart Gray came in and sad the gaffer would not be turning up. 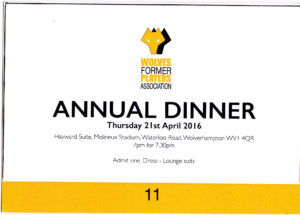 The hottest ticket in town.

“In that case, you expect to see him come in and tell you he’s calling it a day.”

Among the big turn-out from the club in attendance last night were Jez Moxey, Richard Skirrow, the Baroness Rachael Heyhoe Flint, Graham Hughes and various members of the media department.