Still On The Reunion Trail 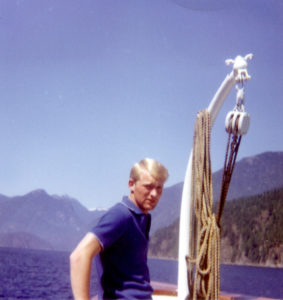 Ken Knighton at leisure on Wolves’ long tour of America and Canada in the summer of 1963.

When we teamed up in 2012 with former Wolves youth player John Doughty and played a support role in a 50-years-on reunion he was organising for his Molineux contemporaries, we promised we would be back with further news from and/or on this interesting character.

A proud Black Country lad, he remained in the area throughout the successful business life that followed his football career – part of the reason he is still in touch with any number of good friends who progressed further in the game than he did.

Bristol-based Ken Knighton was one of those targeted for the anniversary weekend four years ago who wasn’t able to attend but the two promised they would meet when their diaries permitted.

So we were delighted with the news we were given when we had our own recent catch-up with John at his home in Codsall.

“There was a long-standing invitation for the Knightons to come and see us and we were thrilled when they made it earlier this season,” he said.

“It was the weekend of Ken’s wife Carol’s 70th birthday, so they were spending some time up in the Midlands. She is from Wednesbury, where I went to school, and she used to live on the same stretch of the Holyhead Road as John Galley’s wife.

“On the way here, they stopped to pick up Maureen Stobart and also Fred Kemp and his wife and we reminisced about all kind of things.

“It hadn’t been that long since we met as they were here for Barry Stobart’s funeral a few years ago but it was nice to have a purely social get-together.

“Ken was part of the Wolves side who reached the final of the FA Youth Cup against Newcastle in 1962 and would love to have been at the weekend that squad had together in May, 2012. We had a great time.

“Hopefully this was some consolation to him at a time when he and Carol were going on for dinner in Stratford.”

The story doesn’t end there; nothing like. Doughty played only in the early games in that cup run but, being the communicative, social type that he is, has also left a latter-day impression on Peter Knowles, who was in the side beaten by the odd goal over two legs by Newcastle after Wolves had hammered the 1960 and 1961 Youth Cup winners Chelsea in the semi-final.

Doughty has succeeded where so many have failed in getting the one-time Molineux golden boy back out on the ‘football friends’ circuit and added: “Peter didn’t show here when we assembled for afternoon tea on FA Cup final day in 2012 but turned up at Molineux on the night for the dinner.

“He was 70 last autumn and, blow me, he knocked our door that very day. He apparently had someone to see over here, so he popped round and stayed for three hours.

“He has a good memory considering he has not been among football people so much over the decades but he ended by telling me I knew more about his youth than he did!”

We at Wolves Heroes have been glad to connect John in recent months with another figure from his past, albeit not one with any Molineux links.

We received an email from a Derby-based Aston Villa fan called Les Worrall, who worked with him in business in the 1970s and who, on a Google search, spotted this site’s references to his former boss.

“Les was my assistant accountant at a place in Witton, near the Villa ground, and I hadn’t heard from him for 30-odd years,” he said. 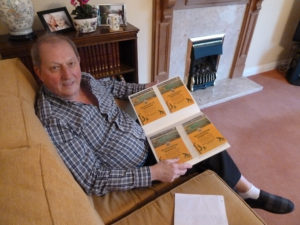 John Doughty at home with his memorabilia.

“We have had a good natter on the phone and said we will try to meet up. He was interested in my background with Wolves and no doubt he will remember an inter-company match we had in 1973.

“A chap called Abdul, who was from Sudan and had a father who was a chief over there, was training to be an accountant and played in the game.

“He didn’t look anything special in the first half and then asked if he could take his boots off as he was more used to playing barefoot. He scored two cracking goals in the second half….it was as though he had been set free!”