Aussie-Based Keeper Who Missed Out At Wolves

Return Call Put Paid To Hopes Of A Molineux Career

Several weeks ago, we were asked by supporter and keen Wolves Heroes follower Kevin Jones whether we could shed any light as to why a Ron Tilsed happened to be in goal in a Central League derby against Albion at Molineux in 1971-72.

A visit to the city’s archive library in the old Molineux Hotel confirmed that the game was played the night before a First Division fixture between the same two clubs at The Hawthorns, so we entrusted Charles Bamforth, who has ‘form’ for tracking down individuals on our behalf, to see if he could locate our man.

As usual, he obliged – and even realised while on a business trip to Australia that the subject of his search was now living Down Under. Charles was disappointed that their diaries didn’t allow a meeting but he did the next thing and arranged a lengthy chat via Skype. Here is his piece:

“I peaked too early.” That, Ron Tilsed told me, would be the title of his autobiography if ever he writes it. And, certainly, the hero of England Youth’s UEFA European Under-18 Championship winning team of 1971 never hit such high spots again through his career between the sticks; a career he wishes had been spent more extensively with Wolves than turned out to be the case.

Despite being domiciled in Australia since 1977, Ron retains a strong Dorset accent. Born in Weymouth in 1952, he switched from left-half to keeper at the age of ten and went on to capture much attention while representing the Herbert Carter School in Hamworthy and the various county representative sides.

“I was spotted by Tony Nelson, the chief scout of my local team, Bournemouth, and signed apprentice forms,” he said. “The manager was the lovely Freddie Cox and the club were in the old Third Division. But we had a wonderful youth side and reached the semi-finals of the FA Youth Cup in 1969 before losing to Sunderland, who would go on to win it (by beating Albion in the final).

“I was spotted by the England Youth set-up and, in the first year of trials, played alongside the likes of Steve Perryman and Tony Towers. I well recall us playing that Sunderland team and we beat them 6-0. The next year was the one where we won the competition in Czechoslovakia.”

England shipped only one goal in that tournament in regular play, that being in the 1-1 draw with USSR in the semi-finals. The side won 4-2 on penalties, Tilsed saving three of those taken by the Russians. In the final, goals from Johnny Ayris and Wolves’ Peter Eastoe (2) defeated Portugal and secured the title.

“Back at Bournemouth, Freddie sold Roger Jones to Blackburn,” Ron continued. “What a great keeper Roger was! He had everything…..he was the best half-volleyer of a ball I have seen and his command of the box, handling and reflexes were excellent.

“He was a tough act to follow. But there I was, in the first team at 17. I was too young for that intensity to be honest, no matter what had happened for England Youth. We got battered 4-0 at Halifax and I was back to second or third choice.

“John Bond had come in and he decided to bring in experience in the form of Fred Davies. With Keiron Baker also there, I was back to square one.”

So how did you get on with Fred, I asked? “Not at all. He thought I was a big-headed prat and he was probably right!”

Bond obviously thought enough of his young keeper to send him to work with Peter Shilton at Leicester for three months.

“I have never seen a work ethic like Shilts,” he said. “He was an absolute animal for training. He deserved everything he achieved.”

Ron believes Daley and Eastoe put in a good word for him at Wolves, so Bill McGarry went calling, recruiting the youngster on loan.

“I don’t recall exactly how long I was there – somewhere between three and six months – but I loved it. I basically shared the second-team job with John Oldfield.

“It was great being in that team, with the likes of Alan Sunderland, Les Wilson, Daley, Eastoe and so on. Lofty Parkes and I worked very well together and I have very fond memories of so many players – Danny Hegan, Frank Munro, Derek Dougan, Waggy.

“Jimmy McCalliog, in particular, took me under his wing. I well remember Monday mornings in the gym with the likes of John Richards and Alan Sunderland…..phenomenal players. I loved working under Sammy Chung.

“McGarry said he was thinking of playing me in a First Division game at Derby but John Bond said he wanted me back to train alongside Fred Davies and push him. But I was young and brash and I blew up.

“I was soon on my way to Chesterfield, where I replaced another England Youth international, Alan Stevenson. Ironically, my first game was a goalless draw against Bournemouth, who got promoted that year.” 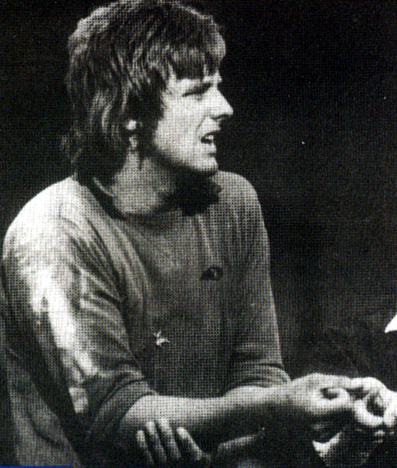 “In that Football Combination side, Liam Brady and Frank Stapleton were coming through. I also made a lifelong friend there in Peter Marinello – I still meet up with him when I travel back to England.

“When Portsmouth came in for me, their chairman John Deakin wanted to spend some money, so they asked me if they thought anyone else from Arsenal was up for the switch to Fratton Park and I suggested Peter. Ron Davies joined us from Southampton and we had Bobby Kellard….a good team.”

After 14 Second Division appearances, though, misfortune struck. “We needed one point from our game with Luton to stay up,” he added. “I dropped a corner kick and, as I went down to grab the ball, Ron Davies took a mighty kick in an attempt to clear. Instead, he got my arm.

“There were 20 minutes left, so they patched me up and I finished the game. I soon had a plate and pin in it. Meanwhile, Pompey signed David Best.

“Once I had healed, I signed for Hereford under Colin Addison but, after a few pre-season friendlies, he was out and they replaced him with John Sillett and Terry Paine. I just did not get on with Sillett, who signed Tommy Hughes from Chelsea, so I was on my way again.”

First it was to Johannesburg Rovers that Tilsed journeyed but, when apartheid issues arose, it was on to Australia.

“The Australian equivalent of Bobby Moore was Johnny Warren, who had played for the Socceroos in the 1974 World Cup. He was at the heart of the new national league that was starting up, so I came over to Canberra in 1977.

“My Dad said I was stupid and he was probably right. I should have stuck it out and persevered in England but I was young and daft.

“I came for two years and have been here ever since, these days based near Sydney. My day job has been in sales since I arrived and I rose to be national sales manager for the largest transport company in the world and these days enjoy working for a large South African concern selling warehouse space.

“But I am still in football and have coached the national team goalkeepers. I love my work with the Sutherland club, coaching their keepers, and am very proud that one of mine is now the third choice at Spurs, Tommy Glover. I have told him that you really should be still at your prime at aged 30, so don’t do what I did!” 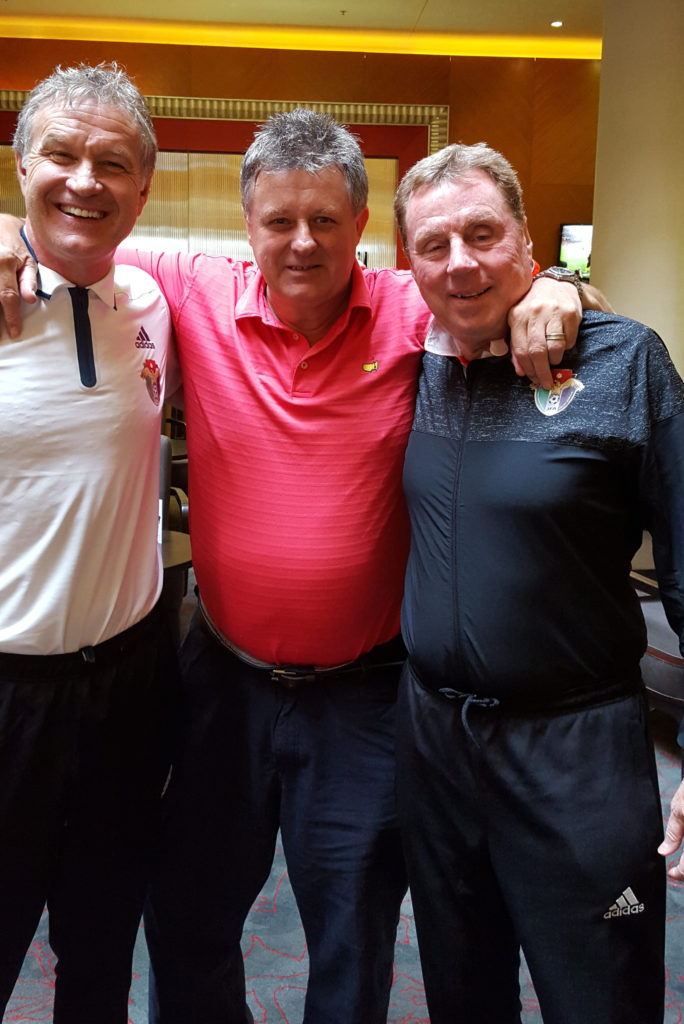 In the company of Kevin Bond (left) and Harry Redknapp.

Ron met his wife back in Poole when both had gone home separately from Australia to be with their families in 1997 at a time of bereavements. He tried the pub trade but soon decided he needed to get back Down Under.

Now, they have a 12-year-old daughter, Bronte, who is shining on the football field and who Ron very much hopes will one day be a Matilda with the Australian National Women’s team. Her position, I asked her? She smiled. “Midfield.”

* When Wolves reserves faced Albion in a 1-1 draw on November 26, they had just returned from beating Carl Zeiss Jena in the UEFA Cup. There was a fitness doubt over Phil Parkes, which is why we assume Rod Arnold was pulled out of Central League duty just in case he was needed at The Hawthorns. Peter Eastoe equalised in the reserves’ clash after 17-year-old Russell Allen – watched from the stands by his father Ronnie – had opened the scoring.