Continental Jaunt That Evaded Our Researchers 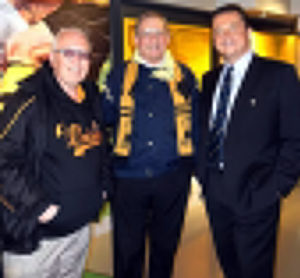 Peter Abbott (left) at the recent event given by the club to London Wolves. Acting as ‘guide’ at Molineux’s terrific museum is Jez Moxey.

Wolves Heroes’ sister company Thomas Publications are grateful to super-fan Peter Abbott for delving into his massive memory bank and recalling a little-known trip the club made approaching 40 years ago.

Soon after the well-read Wolves All Over The World book hit the shelves in the autumn, Peter – one of the faithful first purchasers – let it be known that he thought a brief hop across the Channel had been overlooked in the text.

The publication set out to cover, often in colour photographs, all the adventures that have made the gold and black flag so identifiable across the globe.

But this seasoned traveller, in the news more than once because of his devotion to the cause from his long-time home in Essex and now in Suffolk, correctly pointed out an unmentioned match John Barnwell’s team played in Belgium a few months after winning the League Cup.

“I knew they had played this fixture against La Louviere because I went,” Peter said. “Living in the south-east for so long, I found it relatively easy to jump on a ferry and watch matches abroad.

“I have seen all kinds of games all over Europe as well as further afield in South America and Korea and reckon I have seen 700 matches in Belgium alone.

“I was approaching my mid-20s in 1980 and remember the Wolves game there was originally to have been against Lokeren. I hadn’t booked a hotel or anything, so it was easy enough to change plans and get the train from Brussels up to where the match was being played near Charleroi.

“I actually rang the club for confirmation of the venue and kick-off time and remember being put through to John Barnwell. He also came over and had a chat with a group of us after the game.

“There was nothing like the sort of following there would be nowadays for a Wolves fixture abroad. But there would have been at least a dozen of us, including a car-load who were travelling on to the tournament in Spain that the club had been invited to a few days later.”

We are now glad to be able to repay Peter’s favour by adding some flesh to the bones of a jaunt made in between a couple of friendlies against Shrewsbury and the four-team competition in Bilbao in early August.

Wolves would be heading back to the ‘low’ countries for a UEFA Cup assignment against PSV Eindhoven in the autumn and Barnwell was eager to extend his players’ experience of playing abroad. 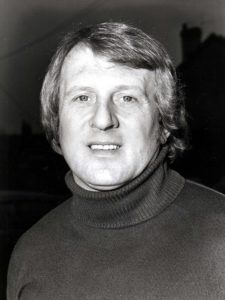 He set up a training camp for five days at Nivelles, half an hour north of Brussels, and had a taste of the temperatures that would await the squad in Spain when the mercury rose very high before the Saturday night game against La Louviere.

Wolves led 2-0 at the break through Andy Gray and Mel Eves but were eventually overhauled 5-4 despite further strikes from Wayne Clarke and the newly-signed Rafael Villazan.

Barnwell named his winning side from Wembley five months earlier but the half-time withdrawal of Kenny Hibbitt with a slight thigh problem was only one of the changes he made as what he regarded as sensible use of his resources in demanding conditions.

“It was murder for the lads,” the manager was quoted as saying in the Express & Star. “They must have lost half a stone in that heat.”

The stay in Spain was not a particularly happy one, at least in terms of results, and the UEFA adventure was brief, despite a rousing second leg against PSV on a night on which the Molneux floodlights failed for a while.

One newsworthy item relayed home by the Express & Star’s Eddie Griffiths, though, was Eves’s decision, made while in Belgium, to come off the transfer list. 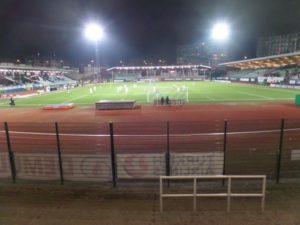 The La Louviere stadium, as shown on the www.soccerway.com website.

As for Peter Abbott, he was at Molineux this afternoon – as usual – having made headlines when missing a home match against Coventry two seasons ago because of a family wedding at which Steve Bull was a surprise guest.

It was the first Wolves game the supporter had missed since a train breakdown had prevented him reaching Blackburn for the fixture near the end of the 1984-85 season.

“The strange thing is that, despite going to around 1,700 games abroad, I have only travelled overseas with Wolves handful of times,” he added. “I lost interest in friendlies a long time ago.”