Player Turnover Going Up And Up

Kenny Jackett has more than a promotion and a near miss on his Molineux CV. He is also very much ‘top end’ in handing debuts to Wolves players.

Having just overseen his 150th match in charge of the club, the head coach can look back on three years of high turnover in terms of permanent signings, loan captures and the blooding of youngsters developed on his adopted patch.

In Sky Bet League One or Championship games alone, the 54-year-old has awarded 35 debuts in nearly three years at an average of 12 per season – well over twice the rate at which Stan Cullis and Bill McGarry introduced players to their Wolves team.

And, with what might be perceived as a normal volume of recruiting this summer, Jackett may well be expected to leapfrog Mick McCarthy in the managers’ table we print below, based in descending order of average number of debuts each Wolves boss has given per year.

Jackett, appointed in the summer of 2012 following the nightmare of a second successive relegation, has a debuts-per-years-in-charge ratio that is higher than almost anyone in the club’s history, even the legendary and pioneering Jack Addenbrooke.

The long-time secretary-manager died in 1922 months a few months after stepping down but welcomed an astonishing 256 players into the team over his 30 years in charge.

Some time in the next few months, Jackett is in line to make someone the 1,000th man to play League football for Wolves and stands head and shoulders above all of his predecessors, except McCarthy, for drafting new faces into the senior side.

It would be too simplistic to put that fact down to personal restlessness or dissatisfaction with his squad. Emerging trends in the game have to be taken into account and it’s a fair bet that other clubs in and beyond the Sky Bet Championship would at least partly mirror this latter-day Wolves penchant for change.

The presence of seven substitutes obviously creates the need for much bigger squads and we live in an era of shorter contracts, reduced player loyalty and more foreign imports than ever; in other words, there is a revolving-door feeling around dressing rooms that often did not exist in decades before.

We should also factor in fans’ expectations. Money is spoken of more than ever and, with that, comes a pressure to chase shorter-term fixes – admittedly, though, very rarely in Wolves’ case under Jackett.

In revealing that John Barnwell made fewer additions to his first team than anyone else in the list of 11 longest-serving Wolves managers, we might consider that money was becoming scarce then following the completion of the John Ireland Stand in 1979 and, at the same time, the production line that had admirably developed young players for various regimes was entering a more fallow period.

But clubs simply didn’t reach for the cheque book and the player market in those days. They worked and developed what they had, with sensible additions where possible and desired.

The fact that McCarthy is up there with Jackett in the debuts-years ratio list underlines that player turnover is so much greater now. McGarry and the present incumbent have each awarded 35 Wolves debuts but one took more than four and a half years longer than the other in doing so.

Like Jackett, McCarthy arrived in a summer at a time when a major rebuilding job was necessary. On day one at Plymouth, the ex-Sunderland and Republic of Ireland gaffer made Jamie Clapham the 877th man to play League football for the club and stayed right through to when Sebastien Bassong became the 946th.

Remarkably, therefore, more than 50 players have gone into Wolves’ League side since the current Ipswich boss left Molineux in February, 2012. The current tally of men used by Wolves in League matches is 998. 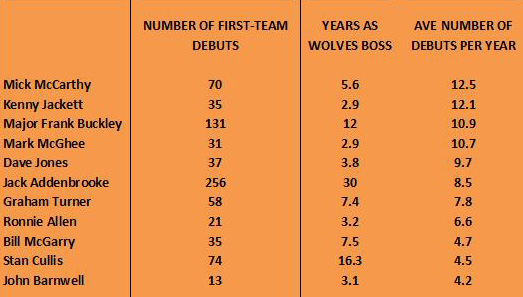 Figures have, in the right-hand two columns, been slightly rounded off in some cases.

The season-ending victory over Sheffield Wednesday on Saturday meant Jackett moved alongside Ronnie Allen as the joint tenth longest-serving boss in the club’s history, based on matches overseen.

So how long will he stay in charge? How will Wolves fare in the 2016-17 season? Who will be the 1,000th man to play League football for the club? Check out http://sports.williamhill.com/bet/en-gb/betting/y/5/et/Football.html for all your odds while memories of Leicester’s extraordinary 5,000/1 title success remain strong!