Mouth-Watering Outlook For Stowell And Friends 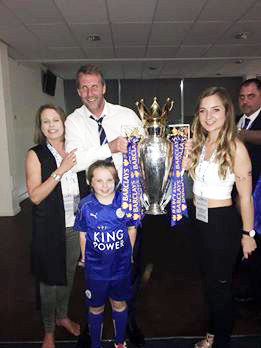 Team Stowell – and a cherished piece of silverware.

It would probably be just as well for Mike Stowell and all those other King Power Stadium heroes if there is no Leicester win/Tottenham defeat combination of results on the final day of the Premier League season tomorrow.

What already seems scarcely believable would surely further enter the realms of fantasy if the champions’ lead stretches as far as 13 points and makes theirs the biggest winning margin in the top flight since Manchester United in 1999.

We were delighted to catch up with the former Wolves keeper yesterday and add a proper word of congratulation to the text message we had sent him earlier in the week.

So just how good is life in the East Midlands and is there any extra insight on top of what has already been said and written?

“I think one of the secrets here has been that the manager really didn’t change what didn’t need changing,” Stowell said.

“We finished last season really well and knew we had a fantastic team spirit which gave us the chance of having a good year. He is very clever at making little tactical changes and pointing things out on video – and of course in keeping pressure off the players.

“He has been different class to work with. It truly has been a big team effort. Team ethic is so important here.

“It has largely been the same group of players but he has added his bits to the good things we had going a year or so ago and that has taken us to where we are.”

Beer and champagne sales have presumably gone through the bar roof since Leicester finally killed off the Tottenham challenge 12 days ago.

Stowell’s own playing career dates back to when there was more of a drinking culture in the English game. The Goal Post was a favoured watering hole for Wolves’ players going back to the Graham Turner era, so have the first-team coach/goalkeeper coach and his backroom colleagues imbibed appropriately?

“I think it’s fair to say we have gone for it,” he laughed. “Not so much the gaffer, though……he is more a sort for a glass of red wine and off early to bed.

“The target, genuinely, was 40 points at the start of the season. Having got there so early, he started to set other targets which stayed in the dressing room. They didn’t come out in interviews.

“He goes on about being more bothered about performances than results. For him, it is about fighting for every single ball and, if you do that, you will win plenty more games than you lose.

“We saw when Arsenal celebrated big time after beating us down there in the last minute that they thought they were in with a good chance but that reaction just seemed to spur us on again.

“Some games, we stormed it by scoring a lot of goals. In others, we scratched it out and were really hard to break down.

“Working with the goalkeepers is obviously one of my specialised roles and I have to say that Kasper Schmeichel is the easiest player I have ever had to coach.

“You might think it’s hard with all the pressure of him having a successful, famous dad and with that strong mental attitude he obviously has but he just loves to work and there’s a good chemistry.

“It’s just a question of keeping him sharp really because he has so much talent. He is improving every year and wants to carry on getting better.”

The Stowells’ eight-year-old daughter Ella was one of the many mascots at last weekend’s big home victory over Everton. She accompanied Christian Fuchs on to the field through the guard of honour and is an occasional visitor to the club’s training ground in between playing for her school and a local club – either as a midfielder or, of course, a goalkeeper!

Her dad can well relate to the mesmerising Jamie Vardy story, having, like the England striker, had a job outside the game before starting to make his way at Preston and as understudy at Everton to Neville Southall.

And his 11-year stay at Leicester has been very much of the roller-coaster variety, containing a relegation to League One under Ian Holloway and no fewer than four stints as caretaker manager.

In the more recent past, though, have come a runaway Championship triumph, an astonishing climb towards mid-table from a position of great peril some 15 months ago and this spring a title conquest to eclipse all title conquests.

And, now, amid frequent talk of helicopters and Mercedes, would seem a good time for him to find out his passport at home in Bristol and check it is nowhere near expiry. Leicester, contrary to some reports, are not going to Las Vegas to continue their celebrations but they are going to Thailand – and then they travel, travel and travel some more.

It truly is a mouth-watering outlook…..Chelsea away tomorrow in a former champions v new champions clash, open-top bus tour of the city on Monday, a flight to Bangkok on Tuesday and then a summer break for all but those involved in international football.

Then pre-season contains a training week in Austria, a glamour friendly at Celtic, a trip to Los Angeles to face Paris St Germain, a hop to Stockholm to take on Barcelona and the Community Shield at Wembley. Oh and the Champions League and the title defence, of course. The big time has arrived for all concerned. 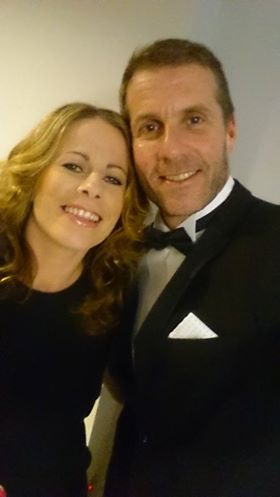 Will this gear get another airing during party season in the East Midlands? Mike Stowell with wife Rachel – a top performer in women’s football.

“It’s a really exciting time for us all,” said Stowell, who has received congratulatory messages in the last few days from former Wolves mates Steve Bull, Andy Thompson, Tony Dinning and Matt Murray. “The Thailand trip is a thank-you organised by the owners for all the brilliant support we have received over there.

“Apart from some time in the gym for the internationals, there won’t be any training. The season has been long enough!

“We have a few days in Bangkok, where we will be shaking a lot of hands, visiting one or two temples and kissing babies’ heads. Then we are off to put a toe in the water in Phuket. That will be a nice rest.”