You Couldn’t Make It Up! 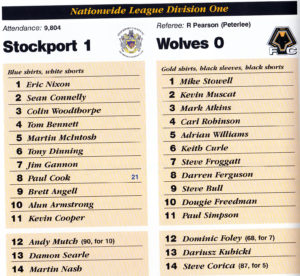 The teams from Edgeley Park 19 years ago.

Tom Bennett played, Andy Mutch was on the substitutes’ bench and Paul Cook was not only in the starting line-up – he scored the winner.

There was a place for Eric Nixon in goal and Sean Connelly and Tony Dinning were others on view.

Observant readers may now have noticed the discrepancy over eras and realised that this wasn’t a Wolves team we’re talking about. Closer inspection might lead to the realisation that it was a Stockport side; especially as Kevin Cooper was also in their 14.

There might, in slightly different circumstances, have been even more….Chris Marsden played 14 games for the Hatters that season and they were managed, until a few weeks prior to this particular date, by Dave Jones. And didn’t Paul Jones have a spell there around this time?

But seven players of past or future Wolves connections seemed more than enough on the day Mark McGhee’s Wanderers lost 1-0 at Edgeley Park on October 25, 1997.

What made the defeat all the more galling, apart from the fact Wolves had the sort of big-name First Division players who might have been confidently expected to take care of such opponents, was that Cook – the popular midfielder who had played 214 games during his five years at Molineux – was signed from Tranmere only the day before.

He received a short pass from his former Wanderers team-mate Bennett and deceived Mike Stowell with a 25-yard shot that crept in low at the keeper’s near post.

The 1-0 home victory hoisted Gary Megson’s side above mid-table Wolves on goal difference and punctured some of the fresh optimism that had come with the recent signings of Kevin Muscat and Dougie Freedman.

And Stockport were still one place and a few goals better off than their bigger-fry rivals when the season ended with both nine points short of the play-off line. 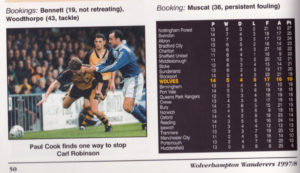 Their cause was helped in no small way by the 4-3 win they pulled off at Molineux on April 18, when there was again considerable ‘Wolves connection’.

Nixon, Connelly, Cook and Cooper were all in the starting line-up, the latter scoring from two penalties on an afternoon marked by a Robbie Keane brace at the other end.

If any of our readers know of games when opponents have lined up against Wolves with even more Molineux links than this, we would be very interested to hear from them.