A High-Class Half Century 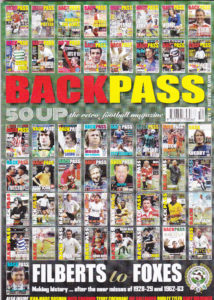 Lots to look back on with pride….

We have pleasure in sending warm congratulations to our good friends at Backpass on the notable occasion of them bringing out their 50th issue.

This is a nostalgia magazine of the highest calibre and, served as it is by a host of Midlands-based writers, has always been rich in Wolves content.

Their milestone offering, movingly dedicated to the memory of the 96 Liverpool fans killed in the Hillsborough tragedy in 1989, contains a three-page feature on former Wolves and Birmingham centre-half Joe Gallagher, complete with colour photo of he and Alan Sunderland in a Molineux derby between the clubs.

The feature is written by David Harrison, one of several Express & Star old boys in the publication’s team of contributors, and contains the story of the defender’s astonishing sacking because of his failure to attend a photo call.

Gallagher, who is still frequently seen in West Midlands press boxes, especially St Andrew’s, has been featured at length by Wolves Heroes over the years and been photographed by us on more than one occasion.

Backpass’s 50th has ‘thumbnail’ pictures of all the previous issues on the front cover and costs £4.30.

There’s a brief reference in David Instone’s interview with Terry Cochrane to the 1981 FA Cup quarter-final between Wolves and Middlesbrough and the 1960 Wolves-Blackburn final and the 1972 Wolves v Leeds title decider are touched on elsewhere.

Skim across more of the 64 glossy pages and a photograph of one of British football’s most famous families, the Clarkes from Short Heath near Willenhall, is also to be seen.

Among those to have been spotlighted on the front cover in the magazine’s eight and a half years on the shelves are John Richards, Steve Daley and Hinton. 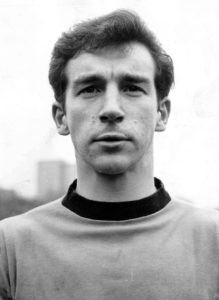 Bob Hatton…..one of the many former Wolves men featured in the nation’s top football magazine.

Back copies of many of the issues are still available – please click on the Backpass icon on the right side of this page to learn more about how to order retrospectively or for the present or future.