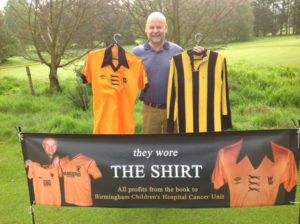 Steve Plant……with his pride and joy!

A sell-out golf day featuring five former Wolves players has given a spectacular kick-start to a charity-driven forthcoming book about the club’s iconic colours.

Kenny Hibbitt, Steve Daley, Mel Eves, Phil Parkes and Phil Nicholls were among the 70 players at sun-kissed Enville for a tournament that has raised £3,300 for Birmingham Children’s Hospital’s cancer unit.

The cheque will be handed over in the near future and the same worthy cause will be benefiting in a big way from every penny of the profit from the high-quality They Wore The Shirt publication which we are delighted to be supporting.

“I am absolutely thrilled with this – it’s a wonderful beginning to what we hope will be a year or so of very good donations to the hospital,” said publisher and entrepreneur Steve Plant.

“We were aiming to raise £1,000, then we amended that to £1,500 if the raffle and auction went well. To make so much more is great news and gets the ball rolling better than we could have imagined.

“My good friend, Dave Foster, has lots of experience at organising events like this in the UK and abroad and sold this one out in a couple of days. He said he could have filled the places twice over.

“Everyone was already asking about it being repeated next year and that is our plan now.

“We will be working hard on the book in the meantime and doing all that we can to make that a big success. It is coming together superbly and the reaction we are receiving wherever we show the draft pages off is really encouraging.

“Some of the Wolves lads were in on the first photo session at Molineux in January and have enjoyed pulling on their favourite Wolves shirts again and helping us tell the story of a kit that is obviously famous all over the world.”

We plan to bring you more news from Molineux’s golf fraternity in the next week, suffice to say that the quintet on view are serial supporters of occasions like this.

Hibbitt, who recalls walking his dog on the nearby common during his Wolves days long before Enville became the outstanding 36-hole set-up it now is, thanked Wolves Heroes for acting as middle-men and helping him secure an invite this weekend.

We also enjoyed meeting up again with Nicholls, who didn’t make the grade as a first-teamer at his local football club but went on to have a fruitful career with Bradford City and Crewe. 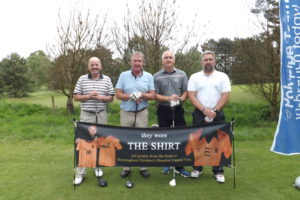 Wolves Heroes’ David Instone is providing much of the text for They Wore The Shirt under the expert guidance of Plant, whose passion for the gold and old gold jersey is matched by his collection of them.

We look forward to revealing at a later date why Birmingham Children’s Hospital are to be the beneficiaries of whatever profit is made by the 256-page hard-back, which is out this autumn.

Please go to www.theyworetheshirt.co.uk for more details and information on how to order.