Abroad With The Wolves

Tuesday, May 2: Had the pleasant job of asking Mike Bailey on behalf of Malta Wolves whether he and wife Barbara fancied a free trip to the sunshine island this summer. The couple are keen travellers and are in demand with the members in a country he visited as skipper of Bill McGarry’s squad back in 1971. Hope they can make it. 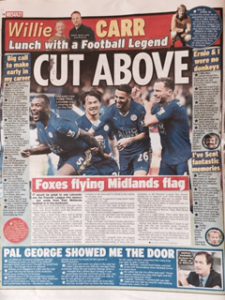 Willie in the news…..

Thursday, May 5: Belatedly caught up with the page feature Midlands journalist Richard Sydenham did in the Star On Sunday a few weeks ago with Willie Carr. As ever, we were glad to act as go-betweens in connecting the two parties.

Saturday, May 7: Met up with Phil Painter, ‘Mr Berlin Wolves’, before the home match against Sheffield Wednesday this afternoon and enjoyed reminiscing about overseas tours of the 1990s and slightly beyond. Phil, a Mancunian who has settled in what used to be the divided city, is over for a few days and remains fully committed in his love for the club.

Thursday, May 12: Had to chuckle on hearing that Portsmouth manager Paul Cook had been sent to the stands along with Plymouth assistant Paul Wootton during the first leg of the play-off clash of the two south coast clubs tonight. He always had loads to say to officials when he was at Molineux! Fingers crossed that Pompey can get the job done at Home Park as their squad contains former Wolves youngster Kyle Bennett, who has played more than 50 games for the club this season.

Sunday, May 15: Enjoyed having a trawl through https://www.youtube.com/user/Mercian1969/videos?sort=p&shelf_id=2&view=0 – an excellent resource for those wishing to pore over highlights of old Wolves games. Particularly liked the old-time sight of a key player (in this case home debutant Derek Parkin, ‘£80,000 of full-back’ as commentator Kenneth Wolstenholme called him) being surrounded by photographers on the pitch before kick-off in the 1968 meeting of Wolves and Liverpool. Please copy and paste the above link into your header.

Monday, May 23: Needless to say, absolutely loved the opportunity to mingle once more with the England World Cup winners at their annual golf weekend at Brocton Hall. Had a chuckle with Ron Flowers as I was walking through the clubhouse and saying that the old building had not changed since I let my membership there lapse around 30 years ago. At that very point, I realised the door I was about to lead us both through was, in fact, the entrance to a cupboard. Don’t know how well the story translates to print but it made us both snigger.

Tuesday, May 24: A busy day writing up the minutes from the Wolves Fans’ Parliament meeting last night. Nice that we had a view of the pitch for a change during proceedings, with the venue switched from the International Lounge to the Hayward Suite because of Costa Coffee staff training in our usual surroundings. 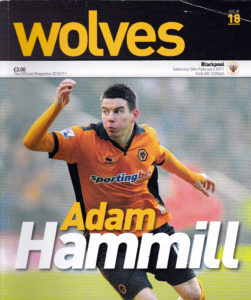 Adam Hammill pictured on the front page of Wolves’ programme shortly after his arrival at Molineux.

Sunday, May 29: So, Barnsley are back on Wolves’ fixture list next season after their play-off final victory over Millwall this afternoon. Wow, what a goal from Adam Hammill! He also scored in the second leg of the semi-final at Walsall, against Oxford during his side’s other winning trip to Wembley this season and hit the decisive penalty in the Johnstone’s Paint Trophy area final against Fleetwood. Seems quite the man for the big occasion. Interesting to note also that former Wolves youngster Sam Winnall has easily topped the Tykes’ marksmen lists this season with his 24 goals.