Hibby Out To Reign In Spain 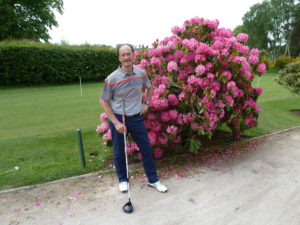 Could it be Augusta? Kenny Hibbitt among the beautiful shrubbery at Enville recently.

We have said before on here what a fine golfer Kenny Hibbitt is and, in Spain tonight, he will show off a green jacket to prove it.

The Molineux legend is among a star-studded group of 40 former footballers who flew to La Manga today for an annual tournament organised by one-time QPR and Arsenal centre-half Terry Mancini.

And the five-night get-together kicks off this evening with Hibbitt, as winner of last year’s jacket, hosting a dinner of past champions.

“I have to choose the menu and probably say a few words,” he told us yesterday. “I also have the pleasure of sitting next to Terry, which will be fun as we’ve known each other for decades and he is a great guy who does a wonderful job in bringing and keeping us all together.

“Pat Jennings presented the jacket to me last year because the 2014 winner, Kenny Dalglish, wasn’t present. But Kenny is there this time and Pat, Russell Osman, Alan McInally and Steve Lovell are others who will be with us, although another previous holder, Andy Gray, can’t be there.

“It’s an absolutely brilliant few days and great fun to meet up again with so many players of my era who I was facing as opponents as far back as the early 1970s.”

Hibbitt has first-time entrant Steve Daley as his room-mate in the resort while other ex-Wolves men in attendance will be Dave Thomas, Derek Mountfield, Dave Beasant and Steve Sedgley.

The Alan Ball Classic team event, in which Hibbitt has also found success in the past, is contested on Sunday, then 24 hours later comes the three-day main championship which is played on a stableford basis.

“This is the 20th anniversary of Terry organising the event and my 14th time there,” the 65-year-old added. “I proved 13 doesn’t have to be unlucky by winning last summer and hope to have a good go at defending it successfully.”

Well, it’s not green but he scrubs up pretty well……

As Ronnie Allen was sacked almost as soon as he made Hibbitt his final Wolves signing – at a ridiculously bargain sum of £5,000 from Bradford Park Avenue – it is unlikely to the two men had much time to discuss golf.

But the former Molineux boss was himself a keen player and was a close enough friend of Seve Ballesteros from his time in Spain with Athletic Bilbao to seek out the superstar during the 1985 Ryder Cup at The Belfry.