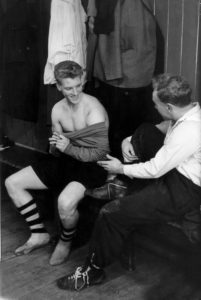 Was there ever a better mentor than this? Lucky Ron Flowers had Billy Wright as a role model with club and country.

How many unique footprints can one man leave on the international landscape?

We have already reported on here that Ron Flowers scored the first goal England ever managed in the European Championships – in a qualifying match against France at Hillsborough on the day in October, 1962 on which his Wolves team-mates Alan Hinton and Chris Crowe made their debuts.

Our readers have also been reminded of how Alf Ramsey put Flowers on stand-by the night before the 1966 World Cup final because Jack Charlton was under the weather and struggling to take his place against West Germany.

Now we can go a little further in outlining the Molineux legend’s career at this exalted level, especially with regard to what followed his unhappy debut in the senior side in their defeat in Paris in May, 1955.

Drafted in for the three-match end-of-season tour, he was assured by club colleague Roy Swinbourne that he would get a start as the other two half-backs in the party, Jimmy Dickinson and Duncan Edwards, were seen as left-halves.

So it proved, with Billy Wright not long having been converted to centre-half, but it was no happy occasion for the new boy, the skipper or the other two Wolves men on show, Bert Williams and Dennis Wilshaw.

Another debutant, Peter Sillett, had already caused the quartet pain that spring by converting the penalty at Stamford Bridge that effectively ensured that Chelsea and not Wolves would lift the 1954-55 League title.

At the Colombes Stadium in France’s capital, the right-back this time conceded a spot-kick from which the home star Raymond Kopa scored the 36th minute only goal of the game.

“Every footballer knows when he is playing badly,” Flowers wrote in his 1962 book, For Wolves And England. “The more I struggled against the French, the poorer became my performance. All the confidence oozed from me.”

It was while the selectors were stuck for 20 minutes in a lift in their Madrid hotel a couple of days later that they decided the blond no 4 should be left out of the game against Spain and replaced by Portsmouth’s Dickinson.

That match was drawn 1-1 but an unhappy tour concluded with a 3-1 defeat by Portugal in Oporto, Williams, Wright and Wilshaw keeping their places throughout while Flowers came to terms with his disappointment.

Wright subsequently referred to the ‘weird logic’ of selectors who would overlook Flowers for three years. Ironically, the younger man would then reel off a run of 40 successive England outings that left him second only to his club and country captain in the ever present stakes. 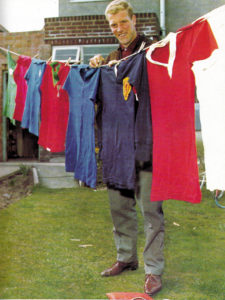 Ron with a few of the international shirts he collected during his 49-cap career.

Remarkably, Flowers is the last man to play for England in the European Championships (or European Nations Cup as it used to be known) while on Wolves’ books.