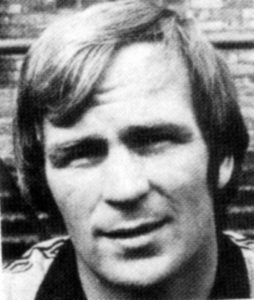 one Ross during his stint at Wolves.

Ian Ross will look on in a mixture of wonder and pride when England take on the one-time minnows of Iceland on Monday night.

For seven years after leaving his coaching post at Wolves in the early 1980s, the former Liverpool and Aston Villa defender managed clubs in the remote North Atlantic country.

And he admits he finds it difficult to believe how far the terrific emergence has taken a nation that he was happy to call home.

“I see the Iceland games on TV and can’t believe how many supporters they have over in France for a start,” he said today.

“It is such a small country, with only a 330,000 population, yet they have had this wonderful journey after reaching the finals of a major tournament at last.

“We won the league twice and finished runners-up twice when I was in Reykjavik with Valur, although they were all part-timers. My left-back was a doctor, my left-winger a dentist and one of my central defenders was Gudni Bergsson, who worked in the media before going on to play for Tottenham and Bolton.

“All my players were Icelandic – now they are scattered all over Europe and at some pretty prominent clubs.”

Ross, who has moved in recent months with wife Rhona from Skelmersdale to Standish on the other side of the M6, was indebted to his former Wolves gaffer and good friend John Barnwell for getting him fixed up in the outpost.

“It was John who Valur approached but he didn’t want to take the job on and kindly recommended me,” he added.

“The chairman came over to meet me in London, we got on well and I said yes. They had nearly gone down the previous season with a German guy in charge, so everyone was happy how it worked out.

“An average league crowd was probably only about 1,500 and some would say it’s not the same as managing in England, but we had young kids at an American school over there at the time and being there was a super experience for us all.

“Our son Steven is working and living in Edinburgh but still loves going out there and we wouldn’t be surprised if he went to live in Iceland.

“I went back two or three years ago when Valur had a big reunion do and paid for us to go over. It was lovely to see some old friends and learn how all the clubs are doing it right by coaching boys and girls from a very young age and having full-size indoor pitches where possible.

“Because of the weather, it is a short season – from May to October – and it’s not a great league if you don’t like flying on small planes that land on runways in narrow valleys!

“Akureyri in the far north is a beautiful spot but there’s basically one road up there and it can be four and a half hours by coach or just under an hour’s flight. You land right at the end of a fjord. One or two of the clubs were based on islands, so we used to fly to play those as well.

“At Valur, we had the bonus of playing in the UEFA Cup and facing Juventus, with Michel Platini, and Nantes. We lost 4-0 in Italy but were delighted that they still sent their strongest squad over and we were beaten only 2-1 that time.

“My playing career came to an end when I was with them. Gudni was injured, so I stepped in as a one-off, got man of the match and then dropped myself for the next game because he was fit.

“I also did a couple of years at KR Reykjavik before getting the manager’s job at Huddersfield. We had kept our house in Compton from when I went to Wolves and I actually brought one of my teams over from Iceland to stay at the Connaught Hotel and play friendlies against Kidderminster and Cheltenham. 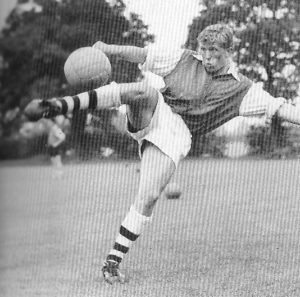 A young John Barnwell in his Arsenal days.

“I had very little to do with the national team when I was over there but have been very interested to watch their big improvement in the last few years.”

Regular readers may recall it was Ross who gave us a good insight into the day Alex Ferguson was at Molineux for an interview while still with Aberdeen more than 30 years ago.

We declined to ask him who is he rooting for on Monday night, although we are mindful that he, like Sir Alex, is a proud Scot!